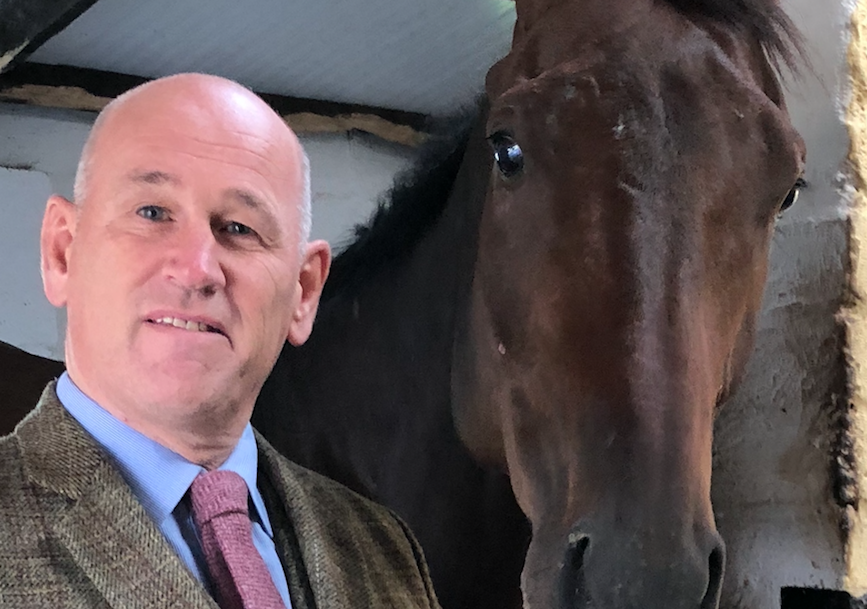 Atholl Duncan with Kelpies Myth, which he part owns and is trained by Lucinda Russell and Peter Scudamore at Kinross

Former BBC Scotland executive, Atholl Duncan, has been appointed to a top role in the horse racing industry.

Mr Duncan, who was head of news and current affairs at BBC Scotland from 2006 to 2011, will take over as chairman of the British Horseracing Authority.

The horse racing industry is worth more than £3.5 billion to the UK economy and supports more than 85,000 jobs.

Mr Duncan, who takes up the post on 12 November, said: “My immediate focus will be to continue to work closely with everyone across horseracing to shape the right improvements we need to meet the many challenges facing our industry.

“I also look forward to supporting and constructively challenging the BHA Executive and the highly dedicated teams across the country who we rely on every day to ensure the smooth running, integrity and welfare of racing.”

Mr Duncan has been a regular racegoer for nearly 40 years; is a Trustee of the Caledonian Racing Society and has been an owner in several syndicates .He has horses in training with Lucinda Russell who trained 2017 Grand National winner One for Arthur.

The appointment is on an interim basis while the BHA and its members continue constructive discussion regarding the makeup of the board and the remit of the chairman.

Mr Duncan’s appointment was recommended by the BHA’s Nominations Committee, which reports to the BHA Board and contains representatives of the BHA’s members – the Racecourse Association (RCA) and Horsemen’s Group. He joined the BHA Board in December 2014.

He spent four years as director of corporate affairs at Scottish Water and since 2011 has been executive director of ICAS, the professional body for chartered accountants.

Atholl Duncan, BHA. British Horse Racing Authority Sport, Appointments No Comments » Print this News
Online and out of town levy ‘a bureaucratic burden’ Previous News
Next News Dundee must ensure the V&A is just the start