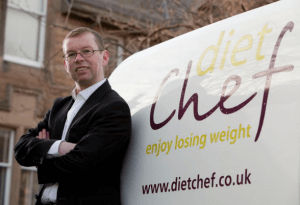 Health food firm Diet Chef, founded by entrepreneur Kevin Dorren, is relocating from Edinburgh to an industry park in Livingston.

The company, which took just a decade from conception to become the UK’s largest home delivery diet company with over 200,000 customers, has leased the 37,000 sq ft 2 Rennie Square at Brucefield Industry Park on a ten-year lease.

Diet Chef secured £1.5million in debt finance from Edinburgh-based crowdlending platform LendingCrowd three years ago in what was the biggest deal by the lender.

The move to Brucefield is the latest handled by Colliers International acting jointly with Denwolf Asset Management.

“Securing a tenant of the calibre of Diet Chef is a reward for this investment – as a fast growing firm, it not only brings jobs to the area but will no doubt create many more over the decade to come.”

Pentland added that Diet Chef, which is relocating from Newbridge in Edinburgh, is not the first firm to commit to Brucefield as the dearth of quality available premises in the capital forces up prices.

He said: “We are starting to see more businesses considering Livingston as Edinburgh rentals rise steadily.”

The Diet Chef deal is the 14th new letting or renewal at Brucefield in the last year. It follows the recent completion of refurbishment at 1 Drummond Square, a prominent 10,880 sq ft area on the park. The refurbishment of 1 MacAdam Square, 27,300 sq ft, continues.

Since the implementation of a new management regime last year, seven tenants have renewed their leases, two more have moved to larger premises and the agents have secured a number of new lettings on the estate.

In addition to this, strong occupier interest means more than 60,000 sq ft is under offer, with a strong pipeline of enquiries.