Ever since they voted against a congestion charge some years ago motorists in Edinburgh have believed the city council has been against them.

There will therefore be some concern, even dismay, at the latest moves to rid the city centre of traffic.

On the other side there are those for whom only a total ban on motorised transport will suffice in tackling air pollution and making the city a better place to visit.

Somewhere between these two viewpoints a compromise needs to be reached, and hopefully the Open Streets programme will be managed in such a way that it improves the quality of life for all concerned without city centre companies and customers taking their business elsewhere.

The initial plan is to bar traffic on the first Sunday of each month between 10am and 5pm to let the public and council see how it works.

No decision has been taken on which roads will be closed during the pilot, but it doesn’t take a genius to work out that it’s likely to see George Street, some surrounding streets, and maybe even a stretch of Princes Street – probably from the junction with the Mound to Lothian Road – closed off.

There are good arguments for closing the Mound entirely along with George IV Bridge to the National Museum, Chambers Street, Cockburn Street and Victoria Street. Closing the lower half of the Royal Mile is also long overdue.

A big fear in all this is that it will lack the required joined up thinking that would bring a properly desired outcome. Take Leith Street, which has just been resurfaced and reopened to traffic after being shut for the best part of a year for the St James development work. The fact that the city continued barely unhindered while it was closed suggests it is an opportunity lost to pedestrianise a street so close to the city’s new flagship shopping and leisure district.

The car ban will be accompanied by more appeals for commuters and residents to choose public transport, cycling and walking which is fine if it’s possible, cost-effective and safe. Of course, a greater use of public transport would require more buses and trams, which must be accommodated somewhere (idea: build another bus station in the west to take buses connecting with Glasgow, Stirling, Perth and Fife). 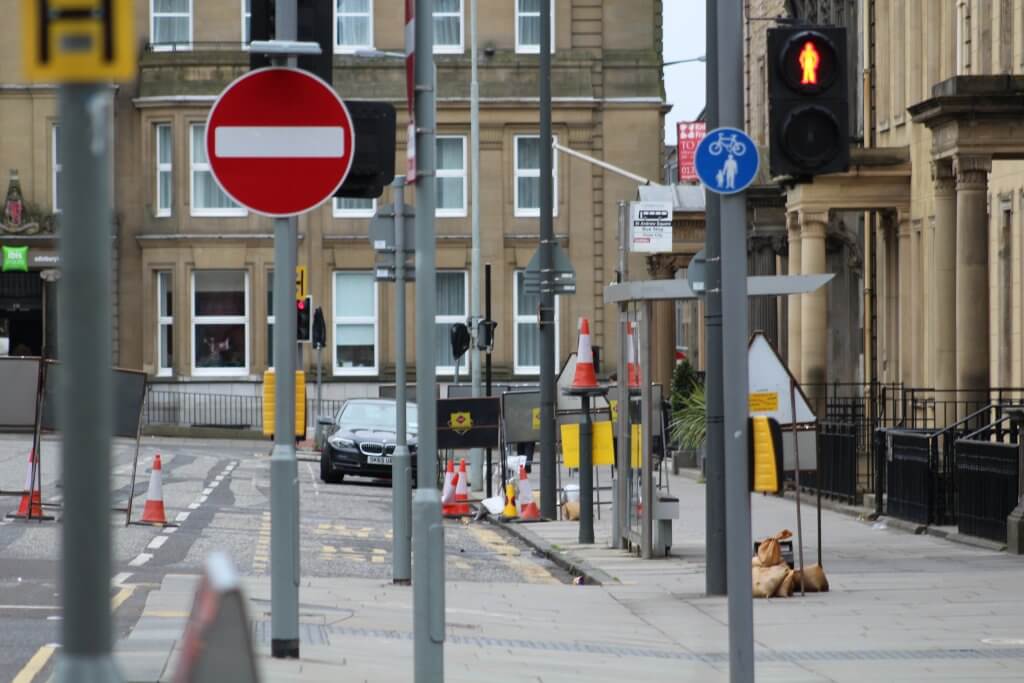 Edinburgh’s streets are cluttered with confusing and unnecessary signage. Where is the cycle lane indicated by the blue sign? (pic: Terry Murden)

There are arguably too many buses already, contributing to the noise and air pollution, but they also provide an excellent cross-city service. If they are banished from key streets where are they to go? Would it mean Queen Street and Lothian Road being turned into bus stations?

A car-free city must still allow some access for deliveries and short-term business visitors, but because of Edinburgh’s protected status it could not replicate the solution in some cities by building a ring of multi-storey car parks within walking distance of the core area. On-street parking therefore becomes a must. If there are fewer streets to park on would it lead to more congestion or higher parking fees, or both?

The application of traffic management does leave something to be desired. Take St Andrew Square where the tram side of the street alone has about 70 signs and push button pedestrian controls, most of them rarely used because there is so little traffic. Apart from being pointless and hideous additions to the streetscape it is a waste of public money.

New paving has been introduced in some areas such as Leith Walk which is too wide and unnecessary. No wonder cyclists abandon the cycle lanes that are allowed to be blocked by parked cars and instead use the pavements.

The Netherlands is the expert in all this. It has an advantage in having no hills, but let’s not quibble over topography. In Amsterdam there are clearly segregated lanes for each mode of transport. It works. In our cities, whether Edinburgh, Glasgow or London, pedestrians, cyclists and motorists compete for the same space. It is confusing, inefficient and dangerous. No cyclist should be allowed to share a major road artery with cars, lorries and buses travelling at speed. 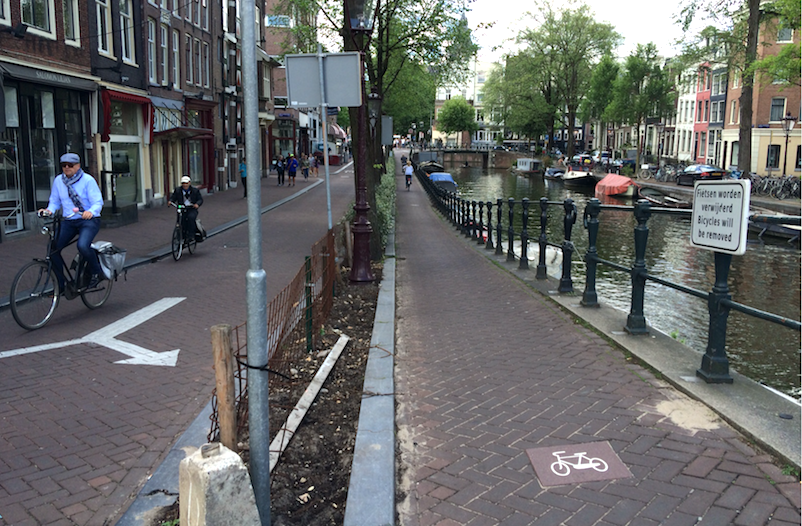 So banning traffic will create a quieter, cleaner city, and would also be visually improved by ridding it of all the junk in the streets. It is noticeable how a pedestrian precinct, stripped of railings, pedestrian crossings and other paraphernalia is a much more pleasant environment.

But a city must also be allowed to function. With retailers struggling for customers they need to draw people into the city, not see them flee to out of town retail parks. Other businesses must not feel that a lack of access puts them at a disadvantage.

So a compromise will be needed, and evidence from some British towns and cities shows that Edinburgh and Glasgow are behind the curve. Dundee has a part-pedestrianised centre and there are others which have adopted the car-free option to compete with bigger neighbouring towns and shopping malls.

It can be made to work and so it should. Let’s not waste too much time dithering and consulting. Let’s just do it. But let’s do it right.

Could the criticisms aimed at the brewing group prompt a change of management, asks TERRY MURDEN

Why it’s time to re-boot the financial sector

A new five-year strategy from SFE was notable for what it failed to mention, says TERRY MURDEN

2 Comments to Traffic-free Edinburgh? Only if we follow the Dutch