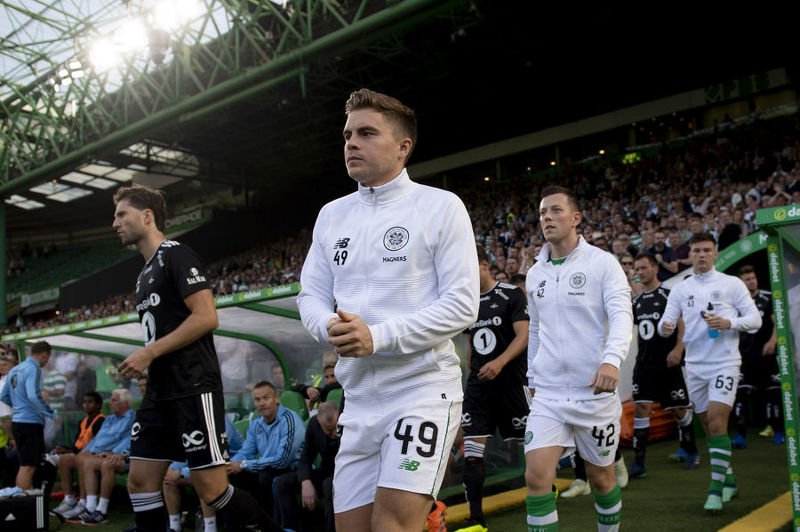 Celtic will line up against Rosenborg for the second time this season after the Europa League draw (pic: SNS Group)

Celtic and Rangers will both have to navigate their way through testing groups if they are to make the knockout stages of the Europa League.

Today’s draw in Monaco saw the Scottish champions come out alongside Austrians FC Salzburg, Bundesliga side RB Leipzig and Rosenborg in Group B.

The latter will be very familiar to the Hoops, Celtic having already defeated the Norwegians in this season’s Champions League qualifiers.

Rangers, who beat FC Ufa to clinch their place in the group stages, will return to Russia having been been drawn against Spartak Moscow. Making up Group G for Steven Gerrard’s team are Spanish aces Villareal and Rapid Vienna.

Whether star striker Moussa Dembele is around to aid Celtic’s Europa League challenge remains unknown, with Lyon said to be ready to part with £15 million to take the Frenchman back across the Channel.

Dembele left today’s training session early after a brief chat with Rodgers, prompting further speculation that a big-money move could be imminent.

Success for Scottish clubs in Europe has proved reasonably lucrative. Celtic and Rangers have earned a total of €6.35m and €4m respectively so far. Under the new payment structure for the Europa League, clubs qualifying for the group stage also receive a share of the co-efficient prize pot.

The SPFL has secured an international media rights agreement with media and marketing agency Infront. This follows the recent termination of the SPFL agreement with MP & Silva.

Based in Switzerland, Infront will look to establish new agreements with overseas broadcasters that will allow matches from the the SPFL, IRN-BRU Cup and Betfred Cup to be shown around the world.

SPFL chief executive Neil Doncaster said: “Infront are a highly respected and experienced global rights agency. They emerged from a number of different companies each of which was keen to represent us overseas.

“We will be working with Infront over the coming weeks to agree deals in those territories where SPFL football is not currently shown.”

Infront Senior Vice President Football, Stephan Herth said: “Infront has a long and successful history within the football industry and we are delighted to begin working with the SPFL to bring matches to fans of Scottish football around the world.

“The SPFL has its own unique legacy. As the second oldest league in the world, it has welcomed many top players and managers over the past few decades. That history will almost certainly be added to in the next seasons. Infront looks forward to building on that legacy and taking the league to a new level on the international stage during that time.”