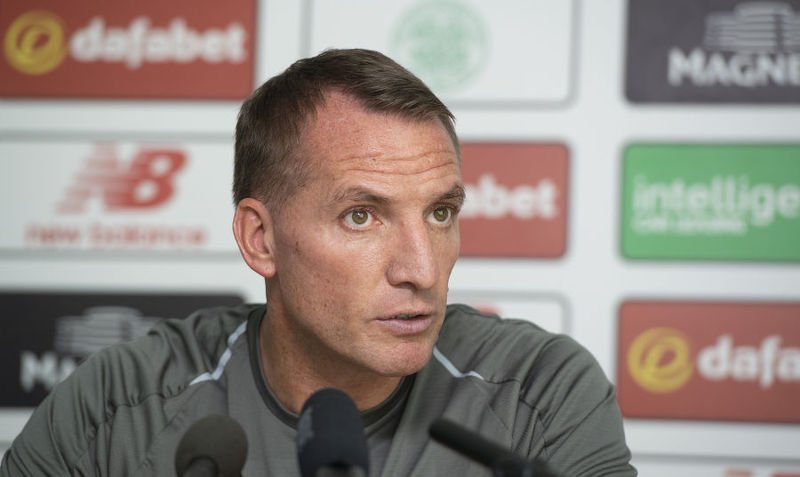 Celtic boss Brendan Rodgers has been trying to focus on preparations for the Champions League qualifier with AEK Athens (pic: SNS Group)

Celtic boss Brendan Rodgers is preparing to get the better of AEK Athens while keeping one eye on the transfer market.

The Hoops manager is keen to bring in fresh talent while trying to ensure his squad isn’t weakened by any further departures.

After sellng Stuart Armstrong to Southampton for £7 million and seen Patrick Roberts depart, the club have been in pursuit of Hibs playmaker John McGinn for some time. Having failed to meet the Easter Road outfit’s asking price, however, they now risk losing the midfielder to other interested parties, with Aston Villa keen to take him south.

Belgium World Cup star Dedryck Boyata has been the subject of a transfer bid from Premiership new boys Fulham, an offer Rodgers has rejected.

The defender, who won’t figure against the Greeks in the first leg of the third qualifying round of the Champions League tonight is in the final year of his contract and is a player highly regarded by the Celtic management.

“He has been a fantastic player for me in my time here, he had an excellent World Cup when he played,” said Rodgers ahead of the game at Parkhead.

“He is a player that we don’t want to lose. At this stage it would be pretty difficult for us to sell him because there is not a replacement there.”

Commenting on the McGinn situation, he added: “I was really interested in bringing him in from a few months back. We haven’t been able to complete a deal and of course when you don’t complete a deal on a player it always opens the door for other teams.

“We’ve lost players so the bare minimum we need to do is replace that.

“Our job this year was pretty straight forward in terms of bringing players in, we only wanted players of quality.”

Rodgers is looking for his players to start strongly against the Greeks, with the Northern Irishman aware the result in Glasgow will go a long way to deciding who makes it through to the play-off round against either Malmo from Sweden or Hungarians MOL Vidi.

Moussa Dembele will once again miss out as he recovers from a hamstring injury, though Leigh Griffiths was given some much-needed game time in the opening-day league victory over Livingston on Saturday.

Olivier Ntcham has been declared fit while Rodgers has options at the back with defender Jozo Simunovic available again after suspension.

“If we can get a win with a clean sheet that will be a great result for us,” said Rodgers.

“We know we can give them problems but we know it will be a real examination over two legs.

“They are obviously champions of their country so that always makes them a tough opponent, because they have that winning mentality.”