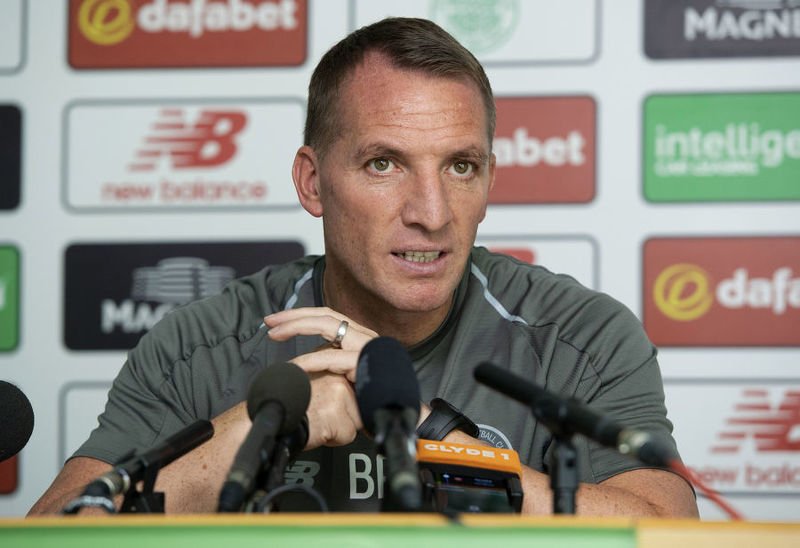 Celtic manager Brendan Rodgers has had plenty to ponder ahead of crucial return leg against AEK Athens (pic: SNS Group)

Talk of boardroom rifts, failed transfer bids and a first league defeat of the season is not the build-up Brendan Rodgers had wanted ahead of Celtic’s make-or-break meeting with AEK in Athens.

The Glasgow side need to score at least once in the Greek capital to stand a chance of progressing to the play-off round, the 1-1 draw at Parkhead in the first leg putting their hosts in the driving seat for the return clash.

It’s the Celts’ biggest test of the season amid what many perceive to be the first signs of disharmony between Rodgers and chief executive Peter Lawwell since the former Liverpool boss’ appointment two years ago.

Frustration seemed to get the better of the Hoops’ manager after the club’s protracted pursuit of John McGinn ended with the midfielder joining Aston Villa from Hibs last week.

Rodgers’ was quoted as saying he would quit the club if the board didn’t match his ambition, although he subsequently stressed he has no desire to ‘walk away’ from his dream job.

Whatever the case may be, it seems the relationship between the pair is not what it once was, although victory in the Olympic Stadium would quickly paper over any cracks.

Defeat to Hearts at the weekend didn’t help matters, albeit it was a much-changed side which succumbed at Tynecastle.

Celtic will be back to something like full-strength for the third qualifying round second leg and Rodgers is hoping his players’ big-game mentality will see them prevail on the night.

“I think qualification in this competition is obviously very important for us,” he said.

“We’ve done that over the last couple of seasons and the main reason, from a football perspective, is purely to compete and challenge at the very highest level of the game, and the Champions League is that in European football.

“We’ve enjoyed our experiences in that and want it to continue. Of course, there’s always the threat of not qualifying but we can’t think of that. We’re not planning on going out, we’re planning on playing well enough to get a result, and last week we showed that.

“We played well enough and made one mistake in the game which we got punished for and have to learn from. This team and group have shown over the last couple of years, in lots of big moments, that they can come through it.

“No doubt, arguably at this stage, this is the biggest challenge, but it’s something we relish.

“That’s something we’ve always done, and we’ve had a number of these big games. We want to show our true face, in terms of the quality in which we can play but also the mentality we have, so we’ll look forward to hopefully showing that.”

Rodgers has been lifted by the return of French striker Moussa Dembele, who has been sidelined since the first qualifying round win over Alashkert in mid-July.

“It’s a big boost for us,” Rodgers said. “He started the season fantastically well and was unfortunate he got his injury. But he has worked very hard to come back and will take his place in the squad. It is probably too much to start, he will take his place on the bench.”

The Celtic manager will be forced into at least once change from the team which started against AEK Athens in Glasgow, centre-half Kristoffer Ajer suspended for the tie following his yellow card at Parkhead.