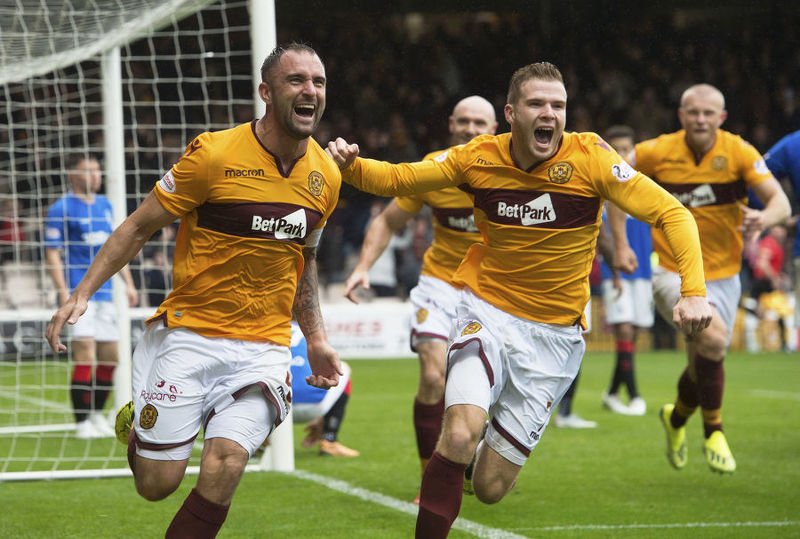 Peter Hartley and Dedryck Boyata have courted controversy recently but the pair made the headlines for all the right reasons on a day of drama in the Scottish Premiership.

Ahead of his side’s clash with Rangers, Motherwell captain Hartley was forced into an apology after claiming it had been ‘fun to watch’ former Gers star Fabio Cardoso ‘weeping’ after breaking his nose against the Steelmen last season.

The furore his comments caused dominated the build-up to the Fir Park encounter and the skipper was once again the centre of attention after netting an injury-time equaliser against Steven Gerrard’s side.

Boyata hadn’t featured for Celtic this season ahead of the visit of Hamiton, the Belgian World Cup star claiming he was injured, something his manager Brendan Rodgers refuted.

Recalled to the starting line-up for the meeting with the Accies at Parkhead, the centre-half scored the only goal of the game as Celtic moved to within three points of pacesetters Hearts.

Rangers’ visit to Fir Park saw six goals shared in an enthralling 90 minutes, the draw stretching their unbeaten run under Gerrard to 11 games.

The home side had gone ahead twice in the first-half with goals from Danny Johnson and Carl McHugh but Kyle Lafferty scored a brace before Ovie Ejaria netted to send Rangers in at the break 3-2 in front.

As the seconds ticked away it appeared as if the Light Blues had registered a vital away win, that was until Hartley popped up to score from close range to snatch a point.

“I had stern words with Peter,” said manager Stephen Robinson after watching his side secure their first point of the campaign.

“He made a mistake, he shouldn’t have said what he said and he came out and was big enough to apologise.

“But I prefer people do their talking on the pitch and, fair play to him, he stepped up at the end.

Gerrard has made a host of new signings since taking charge and hopes to continue his rebuilding plans with the recruitment of a winger and centre-half before the transfer window closes on Friday.

At Parkhead, a section of the Celtic support staged a protest against Boyata, holding up a sign which said ‘not fit to wear the jersey’.

Luckily for those fans the defender, who was the subject of a failed bid by Fulham earlier this month, was stripped for action as it was his second-half tap-in which separated the sides.

“He cruised the game as he’s a top-class player,” said Rodgers, who is reported to be keen on bringing Le Havre’s £5 million-rated defender Harold Moukoudi to Glasgow.

“He made his commitment to the team and he was there for his team-mates today. Everything he did was superb.

“It’s not been an easy time for us all in relation to that matter. When we came back from the European game, we had a couple of days where we spoke a lot and knew it was a watershed moment.

“We knew had to go one of two ways, and the players and staff all came out knowing what direction we wanted to go in. From that, everyone was very focused on having another great season.”

Hearts continued their fine start to the season with a 1-0 win at 10-man Kilmarnock. Uche Ikpeazu scored the clinching goal in the closing minutes after Killie had seen Gary Dicker sent off by Willie Collum with 68 minutes gone.

Craig Levein’s side now sit at the top of the table with maximum points from their first three games.

Gary Holt kicked off his tenure as Livingston manager in the perfect fashion, the West Lothian side defeating St Mirren 2-0 in Paisley, Jack Hamilton and Alan Lithgow getting the goals which gave the Lions their first league win of the season.

Former player-manager Kenny Miller, who left the club after just seven weeks in the job, is said to be interesting Buddies’ boss Alan Stubbs.

Hibs left it late to grab a point at home Aberdeen, Jamie Maclaren popping up four minutes from time to cancel out Tommy Hoban’s opener on the stroke of half-time.

Bottom club Dundee’s woes continued in Perth, where Tony Watt scored the only goal of the game for St Johnstone to send Neil McCann’s side crashing to their third straight loss.