As Murphy ruled out for season...

Returning Lafferty ‘happy to be home’ at Ibrox 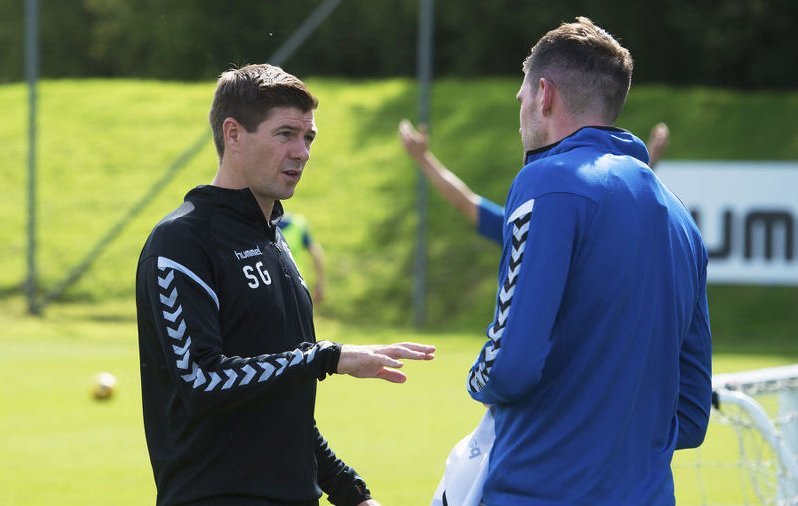 Kyle Lafferty has completed the move he had been craving, signing for Rangers on a two-year-deal from Heart of Midlothian.

The striker, who passed a medical today, returns for a second spell at the club having previously turned out for the Light Blues between 2008 and 2012.

The fee has not been disclosed.

Lafferty won three league titles at Rangers, a Scottish Cup and two League Cups. To date the Northern Irishman has played 138 times for the Light Blues, scoring 38 goals, including one penalty.

After leaving Ibrox, Lafferty joined Swiss side Sion, before switching to Italian side Palermo. He then returned to the UK with Norwich City in the English Championship.

Last summer he moved back north of the Border with Hearts. In 45 appearances for the Tynecastle outfit last season he scored 19 times and netted the winner for the Jambos against Celtic in Edinburgh earlier this month.

Confirming the arrival of the 30-year-old front man who was in his final year at Hearts, Rangers manager Steven Gerrard said: “He knows what this club is all about.

“He ticks all the boxes I’m looking for. There’s no risk in terms of him performing in front of the demands of this crowd.

“We’re a young squad so he brings vital experience.”

Lafferty left Govan as Rangers were set to kick-off the 2012-13 season in the bottom tier of Scottish football following their financial meltdown.

“I have supported the club since I was a kid but the way I left was disappointing,” he said.

“I am happy to be home. Walking out of those doors six years ago broke my heart. I always wanted to come back and put things right and show the fans what I am all about.

“Did I think I would get another chance, though? Not really.”

She said: “It is no secret that this has been a particularly difficult and drawn-out affair.

“While we have no desire to sell our players to other teams in the league, when a player has his mind fully set on moving, it is difficult to reach an alternative conclusion.”

Gerrard’s delight at securing the Northern Ireland front man was tempered by the news that Jamie Murphy has been ruled out for the season.

The winger was stretchered off during the win over Kilmarnock at the weekend, with scans confirming he has ruptured his anterior cruciate ligament.

“I’m bitterly disappointed over it. He’s coming to terms with it now but at the beginning he was upset, as you can understand.

“The important thing now is the player and his care and we will ensure he sees the experts and support him along his recovery.

“We’ll give him every bit of support he needs and we will stick with him. He’s a very important player for us for many, many years.”

Murphy was loan at Ibrox from Brighton last season but the move was made permanent in the summer.

Livingston are expected to appoint Gary Holt as manager to replace Kenny Miller who left his player-manager role after just seven weeks.

Former Scotland midfielder and Falkirk boss Holt, 45, has been out of football since leaving Norwich City where he was first-team coach two years ago.

Livingston hope to have the appointment confirmed ahead of the match against St Mirren at the weekend.