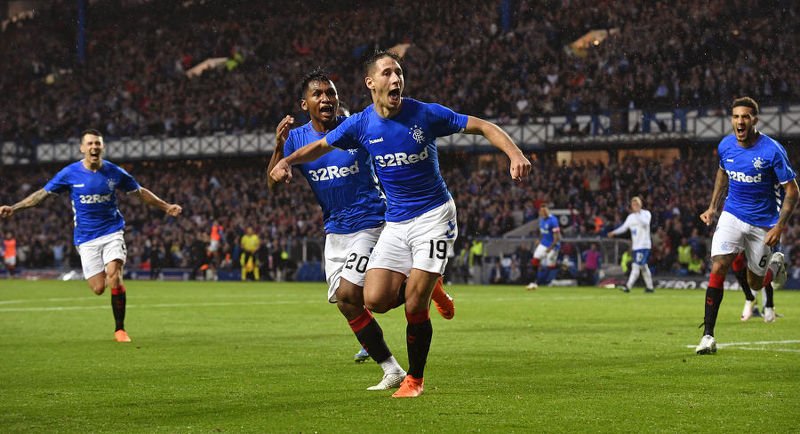 Rangers and Hibs will fly the flag for Scotland in the Europa League third qualifying round after a dramatic night of action saw Aberdeen knocked-out by Burnley after extra-time.

The Dons performed superbly against their English Premiership opponents but ultimately ran out of steam at Turf Moor after pushing the Clarets all the way.

Chris Wood gave the home side an early lead on the night only for former Hamilton player Lewis Ferguson to level the match with a sensational bicycle kick in just his second game for his new club.

Keeper Joe Lewis produced some fine stops in the second half but nothing could separate the teams at the final whistle and with the tie poised at 2-2 on aggregate, another extra 30 minutes were required.

Centre-half Jack Cork took the wind out of Aberdeen’s sails with a header in the first period of extra time before Ashley Barnes converted a late penalty to seal the Dons’ fate and put a somewhat harsh scoreline to the game for them.

It was a valiant effort from Derek McInnes’ side but they now find themselves out of Europe before the domestic season starts – they face Rangers at Pittodrie on Sunday in their league opener.

Hibs produced the result of the night in Greece, their 1-1 draw against Asteras Tripolis seeing them progress 4-3 on aggregate – the first time they have gone through successive rounds in continental competition for 45 years.

John McGinn shrugged off the ongoing transfer speculation surrounding him with a fine performance, the Scotland midfielder opening the scoring on the stroke of half-time.

Despite having Michalis Manias sent off three minutes into the second half, the home side pulled themselves back into the tie when Kosmas Tsilianidis netted after 56 minutes.

Hibs then had to endure constant pressure from the Greeks as they strived for the goal which would have taken them through on the away goals rule.

The Hibees’ defence stood firm, and with Adam Bogdan pulling off some fine stops, Neil Lennon’s outfit booked their passage into the next round where they will face Norway’s Molde.

Rangers completed the job they had started so well in Croatia by drawing 1-1 with Osijek at Ibrox, the Glasgow side advancing 2-1 on aggregate.

It wasn’t the performance Steven Gerrard had been looking for, with an often nervous-looking Gers lacking the imagination required to break down their opponents in the first half.

Nikola Katic’s effort after 53 minutes was just what was required and although Borna Barisic equalised late on to ensure an edgy final few minutes, Gerrard’s men saw the game out to set up a clash with Maribor of Slovenia.