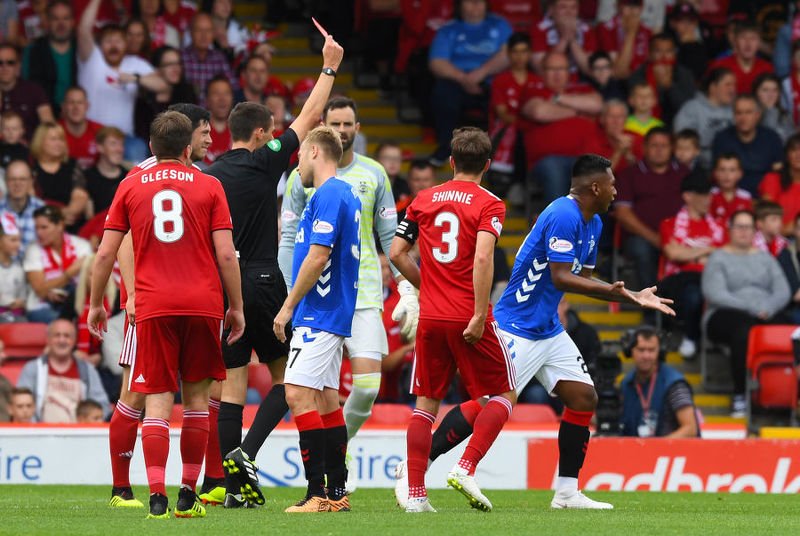 Alfredo Morelos is sent off by referee Kevin Clancy early in the first half at Pittodrie (pic: SNS Group)

Frustration was the name of the game for Rangers boss Steven Gerrard after he was denied an opening-day victory in a vital fixture that was seen as helping to define the season.

Those who expect a revitalised Rangers to mount a serious challenge to Celtic this year would have been encouraged by a dominant performance against one of their chief rivals.

Despite being down to 10 men for the majority of the match at Pittodrie after Alfredo Morelos’ 12-minute red card, the Light Blues had looked on course for a deserved success in the Granite City.

The Colombian striker was dismissed after an off-the-ball incident involving Scott McKenna but his team-mates made light of the numerical disadvantage to dominate the match.

James Tavernier converted from the spot on the half-hour mark and the visitors rarely looked in any trouble against the Dons, who appeared lacking in energy after their extra-time exit to Burnley in the Europa League qualifying on Thursday evening.

The hosts failed to trouble Allan McGregor in the Rangers goal, taking 75 minutes to muster an effort on target.

The lack of penetration looked to have cost them dearly until 19-year-old debutant Bruce Anderson stepped off the bench to crack home a low shot three minutes into stoppage time.

Gerrard, who launched an astonishing attack on referees, claiming they are against his side, said: “Anyone at this game or who watched on TV must know we were much better than Aberdeen.

“We were very good with 11 men, we were even better when we went to 10. Aberdeen didn’t have any idea against us, and for 93 minutes it was perfect.

“Every single player to a man was fantastic. I thought tactically when we went to 10 we were very good and very professional. Aberdeen only had one idea and it was to lump it into the box.

“Obviously, I’m gutted for my players we’ve conceded late on. But we showed today that we’re a class above Aberdeen. I thought we were tremendous.”

Gerrard risked an early confrontation with the SFA by suggesting Rangers are being unfairly treated by referees.

His opposite number Derek McInnes was pleased to take something from the game on a tough afternoon, though he was dealt more injury concerns with McKenna having gone off with what looked like a hamstring problem.

“Our decision-making when they went down to 10 was poor,” he said. “We didn’t play in the right areas or with enough intensity.

“Even though we didn’t play anywhere near our level, the perseverance which has been synonymous with my team over the years gets us the point.”

Stevie Mallan, Olly Shaw and Martin Boyle were all on the mark for the Edinburgh side.

As the curtain went up on the first day of the new Premiership season, there were also wins for Celtic, Kilmarnock, Hearts and St Mirren.