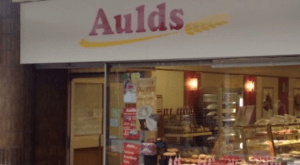 Family bakery Aulds has placed its retail business into liquidation putting 180 jobs at risk as it focuses on its production and wholesale operations.

Liquidators Paul Dounis and Steve Ross of RSM Restructuring are looking to sell all or some of the stores as a going concern to enhance value and safeguard as many jobs as possible.

All 26 Thomas Auld & Sons stores across Scotland will continue to trade; and Aulds bakery products will still be available as normal in 50 Scotmid stores throughout Scotland, as well as from other independent outlets where they are currently sold.

However, pressure from high street and supermarket competition, as well as increasing ingredient, distribution and wage costs, have taken the retail business into an unsustainable loss-making position.

Managing director Alan Marr, a fourth-generation descendent of founder Thomas Auld, who opened his first bakery store in 1900, said the action was the only way to protect the rest of the business, which employs another 200 people. Total headcount across the whole group is 380.

The move will ensure the brand’s survival and safeguard 200 jobs across the group’s two other subsidiary companies, Aulds Bakeries – which manufactures fresh and frozen bakery at the firm’s Greenock site – and Aulds Delicious Desserts, which has a manufacturing facility at Inchinnan and has grown at eight per cent annually over the last three years.

Mr Marr said: “We have invested considerable time and effort over a period of several months looking at alternative courses of action which would allow us to avoid the voluntary insolvency of our retail business. Unfortunately, the losses in our retail business are such that the rest of the group is no longer able to sustain it.

“We sincerely regret that a significant number of our colleagues will be affected by these circumstances, and we’ll be working closely with local job centres and other services to help people into new jobs if necessary.

“The Aulds brand is one of the last large independent retail bakers in Scotland and we passionately believe in our products and are absolutely committed to a successful future for this business. The other parts of our business will continue to operate and people who enjoy our products will still be able to buy them from their usual Scotmid and other local convenience stores.”

Mr Dounis of RSM, said: “Despite exploring possible options to rescue the business, the management team has taken the difficult decision to place the retail arm of the Group into liquidation.

“The ongoing pressure facing the high street has been well documented with high profile names entering distressed situations; and unfortunately, this difficult trading environment has led to another blow for the high street.”