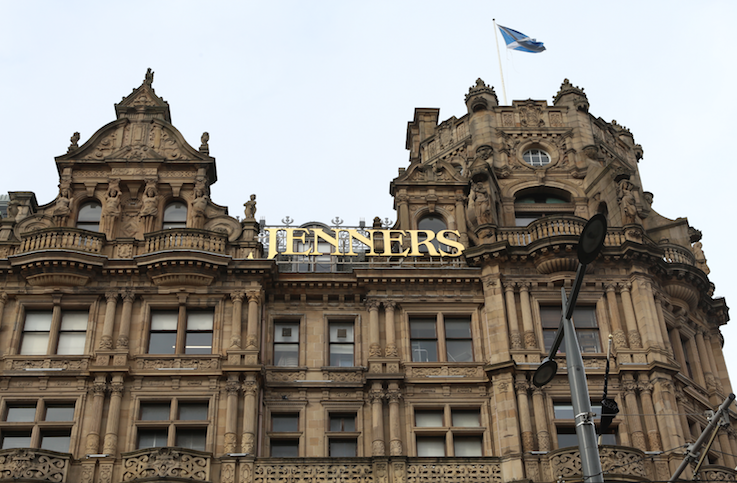 Jenners is now being sucked into the House of Fraser crisis

Jenners, the Edinburgh department store, is facing an uncertain future as its owner House of Fraser faces a race against time to raise new funding.

The company is looking for fresh investment after its rescuer pulled out of a deal to refinance the department stores group.

It planned to close the Frasers store at the west end of Princes Street, Edinburgh, as part the deal but now the future of the whole company, including its original store in Glasgow’s Buchanan Street, is in doubt .

China-based C Banner, which owns the toy store Hamley’s, had planned to take a controlling 51% stake in the struggling chain and inject £70m as part of a restructuring deal that would have seen 31 of its 59 stores close.

House of Fraser agreed a controversial company voluntary arrangement in June but landlords have mounted a legal challenge.

C Banner today informed the Hong Kong Stock Exchange that it was withdrawing its offer.

House of Fraser responded by saying it was talking to alternative investors, believed to include retail turnaround specialist Alteri Investors and Mike Ashley’s Sports Direct.

The company currently employs 17,500 staff and 6,000 would have been axed in the original plan.

In a statement, House of Fraser said: “In light of C.banner’s announcement (and as per House of Fraser’s previous statement to the Luxembourg Exchange), House of Fraser is in discussions with alternative investors and is exploring options to obtain the required investment on the same timetable.

“Discussions are ongoing and a further announcement will be made as and when appropriate.”

On Monday, it emerged that Sports Direct founder Mr Ashley had offered an alternative rescue plan  involving a £50m loan. It already owns an 11.1% stake in House of Fraser.

House of Fraser is due to close its store in Princes Street as part of the cutbacks, but analysts are now concerned that the chain may become an even bigger failure than Bhs.

Mr Ashley may be a potential saviour but analysts are asking why he would want to take on retailer considered to be in technical default on its loans by credit ratings agency Moody’s.

Nick Bubb, an independent retail analyst, said: “It’s not obvious why businessmen like Mike Ashley will prop it up when they can get it for practically nothing if and when the business goes into administration.”

The chain was founded in 1849 in Glasgow as Arthur and Fraser, to sell textiles. It fell out of family ownership in 1981 when Professor Roland Smith took over.

Since then it has changed ownership numerous times. It was sold to the Al-Fayed family for £615m in 1985 and Jenners became part of the group in 2005. A year later it was acquired by the Icelandic Baugur Group and British entrepreneur Don McCarthy.

Nanjing Xinjiekou Department Store Co, a Chinese company and part of the Sanpower conglomerate bought it for £480m in 2014 with plans to expand into China.