Apple heads for $1tn as US ponders higher China tariffs 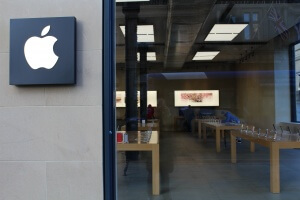 Apple remained on course to become the world’s first $1 trillion company after third quarter figures sent its shares up 3% in after hours trading.

Its market capitalisation means it is worth roughly 6% of US GDP and the company together with Amazon, Netflix, Alphabet (owner of Google) and Facebook account for 20%.

The firm sold 41.3 million iPhones in the three months to the end of June, up just 1% from last year. But the average iPhone selling price hit $724, well above the expected $694.

Meanwhile, the US risks escalating tensions with China by imposing 25% tariffs on $200bn (£152bn) of Chinese goods, much higher than the 10% it previously indicated.

The plan could be announced today.