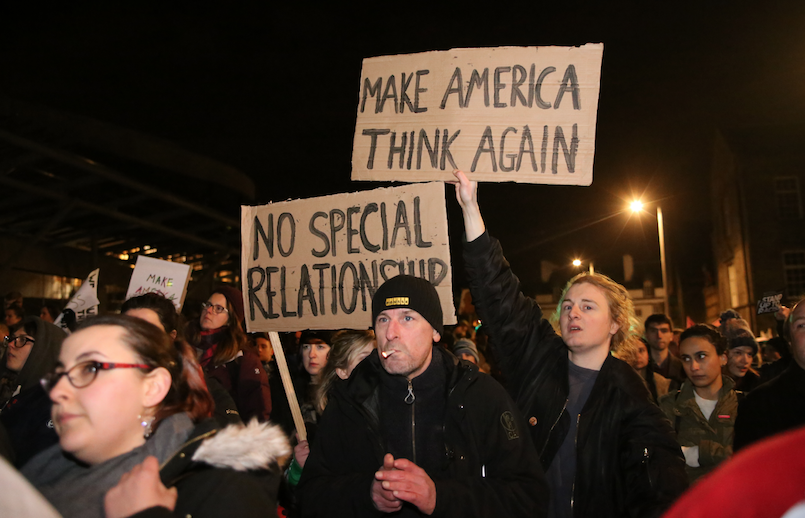 Protests like this one in Edinburgh last year will greet Donald Trump this weekend (pic: Terry Murden)

Some of Britain’s biggest businesses will be represented at a dinner with President Trump tonight as he begins a controversial weekend visit to England and Scotland.

Mr Trump will host a banquet at Blenheim Palace, birthplace of Sir Winston Churchill, with his tariffs on imports likely to be the main topic of conversation.

About 150 business leaders will attend, though some including the internet pioneer Baroness Lane-Fox have declined.

She said last week: “I understand why the government have to entertain Trump, but I certainly don’t have to,” she said. Sir Richard Branson and Lord Sugar are other notable absentees.

Among those who will take their seat are Sir Jim Ratcliffe, owner of chemicals group Ineos, and Jes Staley, the chief executive of Barclays, whose office described its view on his policies as “agnostic”.

Mr Trump’s visit has been downgraded from a state visit but he will meet the Queen at Windsor Castle and Prime Minister Theresa May at Chequers.

He will be greeted with protests north and south of the border over his controversial policies on human rights. 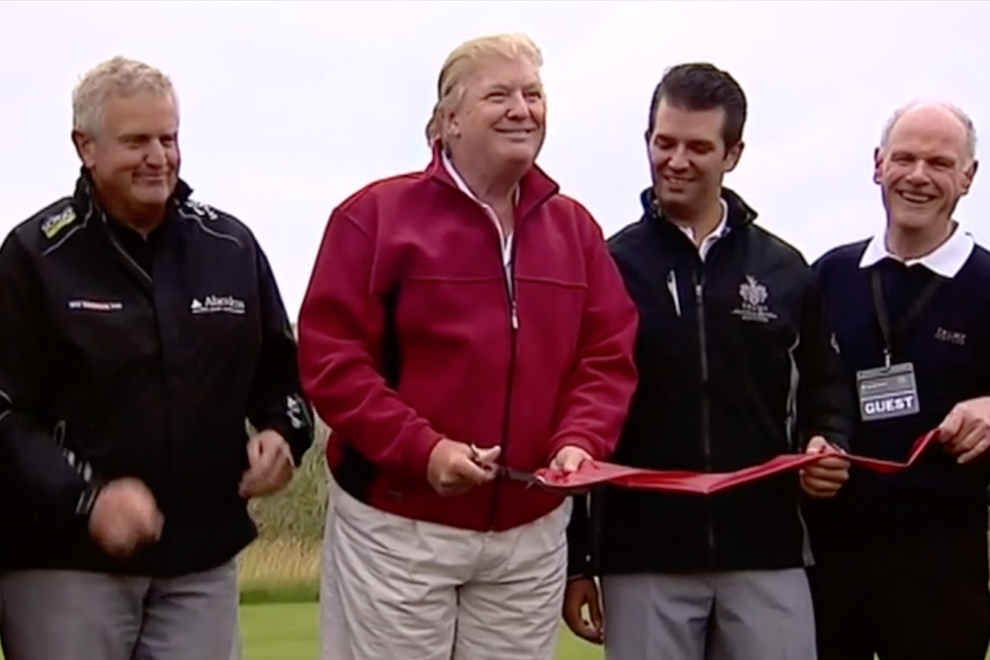 Donald Trump at the opening of his Aberdeenshire course

He will be in Scotland to play golf at Turnberry, one of his courses, but he will not meet the First Minister Nicola Sturgeon.

He will be met by David Mundell, the Scottish Secretary, when his plane touches down at Prestwick Airport tomorrow. There will be demonstrations in Edinburgh, Glasgow and Aberdeenshire.

“The horrific scenes at the Mexican border are a repudiation of decent human values. Caging children like animals is barbaric. We cannot roll out the red carpet for a US President that treats human beings this way.

“From his disgraceful equating of anti-fascist campaigners with Nazis in Charlottesville, his withdrawal from the Paris Climate Agreement, to his Islamophobic travel ban and his misogyny Donald Trump has demonstrated that he should be denied any kind of welcome.

“Scotland can and should work for peace and co-operation in the world.

“For Donald Trump to travel to Scotland with public assistance and ease when his travel ban has caused outrage and despair around the world would simply not be acceptable.

“The Scottish Government owns Prestwick Airport. We believe that this publicly-owned facility should not be used for Donald Trump’s visit.”

Linkedin
Donald Trump in UK, Trump in Scotland News, Politics, Scotland, UK, World No Comments » Print this News
May shrugs off resignations ahead of Brexit paper Previous News
Next News Rangers back in court in replica kit battle with Ashley