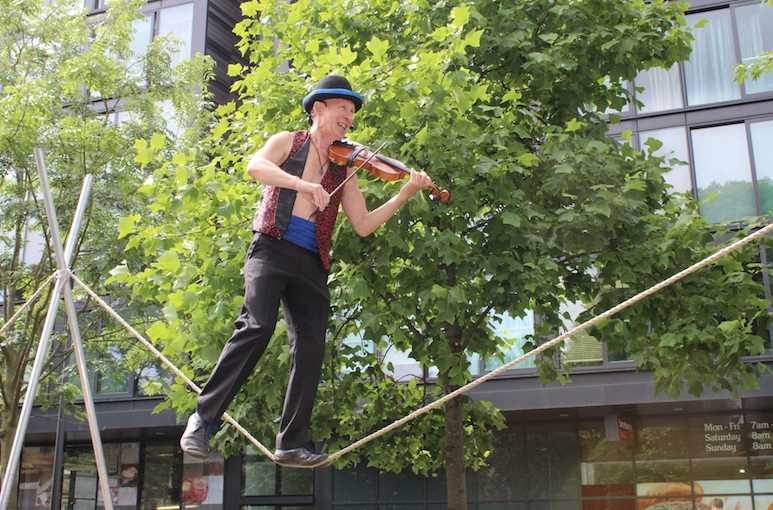 Edinburgh Council, like others, is walking a financial tightrope (pic: Terry Murden)

Should Edinburgh bolster its overstretched finances by introducing a Tourism Tax? And what of other parts of Scotland? Should Glasgow or the Highlands do the same?

The problem with taxes is that they have a tendency to depress economic activity – and with Scotland’s economic growth at only 0.2% in the first quarter of the year that’s the last thing politicians should be considering.

Just as London drives the UK economy, Edinburgh is the engine for Scotland, so anything that might hurt the capital’s wellbeing is important to everyone.

The SNP leader of Edinburgh Council Adam McVey claimed this week he could have a Tourist Tax in place and ready to go by next year – if approved by the Scottish Government – only to be immediately slapped down by Culture Secretary and fellow party member Fiona Hyslop in a rather terse tweet which she sent from Japan. She is right to be cautious.

There is a risk that Edinburgh could price itself out of some sectors of the tourism market to the benefit of other destinations and that it would impact adversely on businesses being tasked with the role of tax collectors for the city.

When I campaigned against re-establishing a Scottish Parliament 21 years ago I warned the consequences would include local government being marginalised and eventually a tourism tax being introduced. It does not please me to say that local councils have indeed been sidelined, with their budgets cut heavily and a number of services they deliver being centralised.

Over those years tourism has steadily grown in Edinburgh, thanks in part to the growth of low-cost airlines and the development of far more hotels catering for all price points.

However, for locals, the commotion tourism causes and the resulting demand on services can at times be insufferable. Complaints about the scruffiness of the city, the litter, the potholes and the congestion are regular topics of conversation. The huge number of jobs created is a trade-off most people are willing to support.

The problem for the city, and other local councils across Scotland, is that while tourists add demands on parks and recreation facilities, refuse and litter collections, road maintenance and other services, they do not add directly to public revenue.

All the additional economic activity generated helps theTreasury in London through VAT receipts and the added PAYE and NIC payments from the additional jobs. But local government has faced a 9.6% real terms cut in income since 2010/11. It is no surprise, therefore, that councils are looking for something to make up the shortfall.

A small levy on visitors has steadily won support, but taxes have a habit of rising. As such, small hotels, guest houses and bed & breakfasts will fear being squeezed between two unstoppable forces – that some customers will choose another destination altogether, while others will opt for AirBNB accommodation that could avoid collecting the tourism tax.

Bigger hotels pay the Large Business Rates Supplement which, at 2.6%, is double the charge in England. Edinburgh has a 1% levy on rateable value for the Business Improvement District. Business must pay the apprenticeship levy if turnover is over £3m, together with the increase in statutory employers’ pensions contributions from 1% to 2% this year, going up to 3% next year.

UK hotels are already expensive because the full 20% rate of VAT is levied. In other countries, tourist tax or not, VAT is significantly lower – 7% in Germany, 9% in Ireland, 10% in France and Spain and 12% in Sweden. In these countries, a further levy of one euro per person per night it is not so noticeable.

A crucial question for Edinburgh is whether the estimated £11m added income from such a tax would really produce a visible improvement to the city while having no adverse impact on the its pulling power.

The demands for a Tourism Tax are, in fact, a symptom of the real need for local government reform in Scotland. We need to ask what local councils are for and how should they be financed. Without first looking at the functions councils should perform, a new tourist tax can only be a sticking plaster.

In short a tourism tax is a daft answer to the wrong question. If devolution delivered better local government it would not be needed.