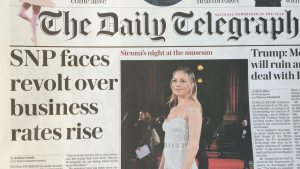 Media analysts are speculating that the Telegraph titles may be up for sale after the company’s results statement was interpreted as a sales document.

The titles are owned by the Channel Islands-based Barclay brothers, who also own the Ritz hotel in London, and once owned Scotsman Publications.

As a privately-owned company, the decision to issue results soon after its year end has fuelled speculation that the Barclays are seeking to sell the titles, which they bought in 2004 for £665m from Canadian tycoon Conrad Black.

Along with other newspaper groups, the company is battling against sharply declining sales of its print editions. The Daily Telegraph is selling an average of 376,000 copies in May and The Sunday Telegraph 303,000 .

The company decided to stop distributing “bulk”, or discounted, copies to outlets such as hotels and airlines.

Media commentator Roy Greenslade told the BBC that the Telegraph’s four-page statement read “more like a prospectus” than a set of results.

Alice Pickthall, a media analyst at Enders Analysis, said the Telegraph’s digital push would not make up for the decline in print revenues in the short term but was a necessary move given the sliding sales of the papers.

London’s Evening Standard, which is given away for free, is expected to post a loss of £10m for the year to September 2017 againt a £2m profit for the previous 12-month period.