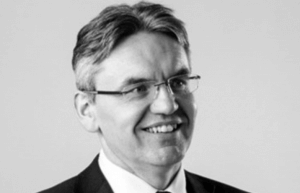 Scott Cunningham (pictured), who will take up the role in September, has more than 25 years’ experience in the accounting and finance profession. He was group finance director of AIM quoted InterBulk Group for nine years before the group was sold to Den Hartogh in March 2016.

Before this he performed a number of roles within Mr McColl’s Clyde Blowers portfolio including group financial controller for the Clyde Bergemann Power Group from 2003 to 2006 and more recently was an investment director at Clyde Blowers Capital.

He is a member of the Institute of Chartered Accountants of Scotland having qualified with Arthur Andersen in 1995.

Mr Logan has agreed to be available until the end of December in order to ensure an orderly handover.

Ian Ritchie, chairman of Glasgow-based Iomart, said: “I’d like to thank Richard for the outstanding contribution he has made to the success of iomart Group during his 12 year tenure. He leaves the group on a sound financial footing, with high levels of revenue visibility and a strong balance sheet. I wish him every future success.”

Angus MacSween, CEO, commented: “I concur with the chairman’s comments and after a busy 12 years I wish Richard a long and healthy retirement. In Scott we have found another high calibre finance director and look forward to him joining the business in September.”

Mr Cunningham said: “I am delighted to be joining iomart, which has built a successful position in the growing cloud computing market and has developed a reputation for consistent delivery. i

“Iomart has a significant and sustainable market opportunity ahead of it, as the move to the cloud continues, and I look forward to working with Angus and the team to deliver upon that opportunity.”