Celtic stroll through to set up Rosenborg rematch 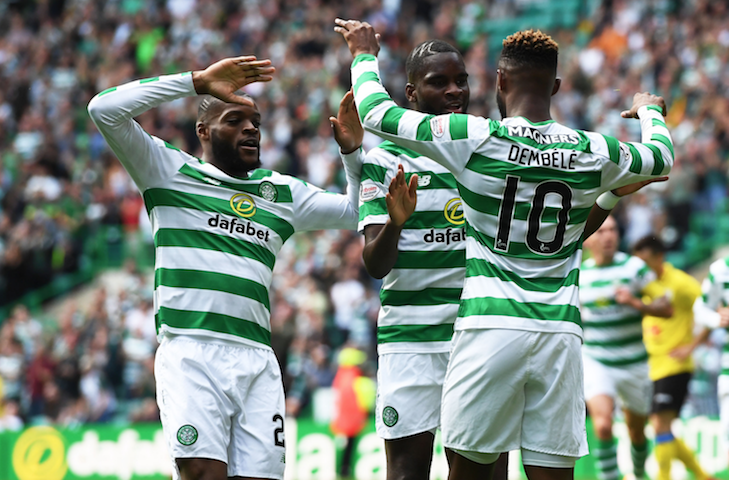 Celtic’s Moussa Dembele celebrates scoring but he would later cause concern by going off injured (pic: SNS Group)

Celtic set up a Champions League rematch with Rosenborg after completing a routine victory over Alashkert at Parkhead.

Already leading 3-0 from the first leg in Armenia, Brendan Rodgers’ side coasted to a similar result in Glasgow, with all the goals coming in the first half.

A Moussa Dembele double and a goal from James Forrest had the tie over by the interval, despite the hosts having had defender Jozo Simunovic red carded for a high tackle after just 10 minutes.

The Bosnian will now be suspended for the first leg next week and there are injury concerns over Dembele, with the front man having been substituted midway through the second period with what appeared to be a hamstring problem.

“He just felt a little bit of tightness in his hamstring,” said the Celtic boss.

“We’ll find out in the next couple of days. We’ll just need to see where he is with that.”

Next Wednesday’s visit of the Norwegians in the second qualifying round promises to be a tougher examination for the Scottish champions, although Rosenborg left it late in Trondheim to see off the unfancied Valur.

The Icelanders took a 1-0 advantage into the return leg and looked to have secured a surprise victory on away goals when they levelled the match 2-2 on aggregate with just minutes to go. However, former Arsenal striker Nicklas Bendtner slotted a late penalty to set up the Hoops rematch.

Celtic won last season’s qualifier by the narrowest of margins, Forrest scoring the only goal of the game in the away leg after the teams drew 0-0 in Glasgow.