Use rates system to boost business, not penalise it

There is no silver bullet that will deliver greater economic growth in Scotland. To ensure that year on year we at least match the UK’s GDP performance (in itself rather pedestrian) will require many small and incremental improvements rather than one big policy that would solve our sluggishness. And yet there is one regenerative policy that could be introduced that is repeatedly ignored.

Ironically, after nearly twenty years of the Scottish Parliament, the one tax that it has always had control over has never been used in a manner to encourage businesses to form, expand and multiply.

Non-domestic rates, more commonly known as business rates, has always been the one tax MSPs could have done something with, but instead they were more interested in gaining further powers than pull the obvious leaver that could have made some difference.

In my book, the measure of an able politician is what he or she does when they have power at their disposal rather when they have no responsibility and their mouths can run free. Until they wield authority they are never fully tested – and at every turn under Holyrood’s  various finance ministers of Jack McConnell, Angus McKay, Andy Kerr, Tom McCabe, John Swinney and Derek Mackay never sought to use business rates as a force for good. Worse still, some actually used the one national tax available to them as a cash cow.

It should be remembered that throughout the 1990s Scottish business fought an admirable campaign to convince the then Conservative government that to secure a level playing field with the UK (and especially England) there was a need to establish a universal business rate. By ensuring that the poundage was the same it would only be the rateable value that would vary, delivering a different yield on similar properties because of their relative market value.

‘The arrival of UBR was hailed as a great success’

This made a great deal of sense compared to the famous, but true, example whereby Jenners department store in Edinburgh’s Princes Street paid more in rates than Harrod’s paid in London’s Knightsbridge. A UBR would mean comparative advantage would arise for Scotland against many more expensive locations in the UK (and for poorer areas within Scotland against more expensive locations) – delivering a more efficient use of properties and a true market.

This policy required a period of adjustment to achieve and a not insubstantial fiscal transfer to Scotland to bring down our business rates to the lower English level (rather than push the rates up elsewhere). When it was delivered the arrival of UBR was hailed as a great success. 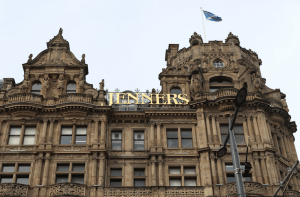 Unfortunately this great achievement of Scottish business lobbying was completely thrown away when as the Scottish parliament’s first Finance Minister Jack McConnell decided to break with the UBR and increase the Scottish Business Rate poundage.

The result was Scotland lost its comparative advantage and it again took many years before it was recognised this had been a mistake – ironically by Jack McConnell himself once he became First Minister. No sooner did the SNP come to power in 2007 and they too used the business rates as a means to raise funds from businesses rather than the voters directly.

Of course the politicians were sly about what they were doing, they would talk about providing rates relief to hard-pressed businesses, but this was a smokescreen, for what they did was raise thresholds for small businesses by raising a levy on larger businesses. Overnight those that had built their businesses up and expanded found that they were penalised by a higher poundage, while businesses that hadn’t grown were rewarded – this policy still exists.

The time is long overdue for business rates to become a political issue again. It is a regressive tax with no relation to a business’s profitability, being an overhead that has to be paid whatever the turnover, rather than a progressive tax relevant to net business earnings.

‘We should go further and seek to reduce the business rate’

The Scottish Chambers of Commerce is helping to work towards the restoration of a universal business rate by campaigning for Scottish business rates to use the CPI index for inflation rather than RPI, as the Scottish Government currently does. Because the English rates are using CPI divergence between the two poundages happens even when governments do nothing. The Barclay Commission report made the same recommendation but still the Scottish Government will not commit to making this change.

It would be a modest but very welcome change were it to be adopted.

Any Scottish government with genuine ambition would go further and seek to reduce the business rate, abolishing the large business levy, and taking the poundage below the rest of the UK. My preference would be to establish a commission to identify savings within the government’s operations and commit those to reducing the poundage by 5p every year.

Over a period of ten years it would be possible to abolish business rates altogether and make Scotland the place to locate to in the UK. It might sound a far-fetched goal but had it been adopted in, say, 2007 we could have delivered that outcome by now.

Politicians love to criticise managements and investors for taking a short term view, but with local, Scottish and UK elections now so common there is an election nearly every year that ensures it is the politicians who have the problem of taking short term decisions.  It would be revolutionary for them to commit to a policy that would deliver over two parliamentary terms and stick to it – but by phasing out business rates the results could be revolutionary too.

One Comment to Use rates system to boost business, not penalise it