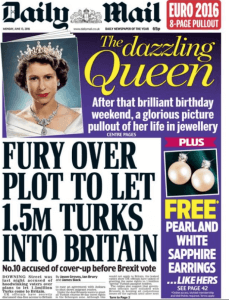 A supporter of Britain remaining in the EU was today appointed editor of the Daily Mail, prompting speculation that the title may perform a spectacular u-turn.

Geordie Greig, editor of sister title the Mail on Sunday, will replace Brexit-supporting Paul Dacre who announced yesterday that he will retire from the post in the autumn.

Mr Greig, 57, has been editor of the Sunday title since 2012. In stark contrast to its daily stablemate, the Mail on Sunday has strongly supported the UK staying in the EU.

His appointment to the daily title has prompted some commentators to question whether the Mail might also change its editorial stance on Brexit.

Mr Dacre will become editor in chief and chairman of Associated Newspapers.

Dacre to step down