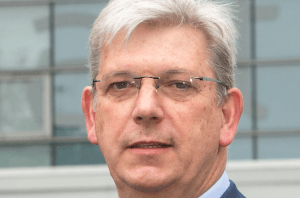 Cloud computing company Iomart has hit a new revenue milestone and announced a further boost to its dividend payout.

Adjusted profit before tax for the year came in 7% higher at £24m on a 9% boost to revenue to just under £100 million.

Following the payment of a maiden interim dividend of 2.25p per share the board is now proposing to pay a final dividend of 4.93p per share on 6 September.

With this final dividend payment the total for the year will be 7.18p representing an increase of 20% over last year and equivalent to a pay-out ratio of 40% of adjusted diluted earnings per share

Speaking to Daily Business Angus MacSween, CEO (pictured), said it was a case of “steady as you go” as the company remained on course to meet its targets.

He said about half of the growth had come from the 20 acquisitions the company has made in the past 10 years and the board remained alert to any opportunities.

The company has also renegotiated its credit facility with Bank of Scotland, raising the finance available from £60m to £80m ahead of a deadline next March.

In a statement with the results, he said: “We are delighted to report another year of excellent results, with increased revenues and profits and the completion of a number of acquisitions, augmenting the group’s customer base and skill set. Trading in the new year has continued in a similarly positive vein.

“Since we embarked on our current strategy in 2007, we have successfully executed on our growth strategy, growing revenues from £8m to nearly £100m.

“We strongly believe that the market for cloud computing solutions we identified at the time presents us with as much opportunity now as it did then and that, together with additional acquisitions, will allow us to continue to execute successfully on the strategy we put in place at that time.

“There is still a long runway of opportunity as the “IT as a service” philosophy and delivery unfolds, providing us with considerable scope for long-term, sustained growth. We therefore look to the coming year and beyond with confidence”.

Chairman Ian Ritchie said: “This has been another active year on the acquisition front as we have welcomed Dediserve, Simple Servers and Sonassi into the Group. The latter two acquisitions provide us with a high level of expertise in the provision of Magento hosting, which represents our first foray into the area of application support.

“We have started the new financial year in a strong position and I look forward to another exciting year of growth with considerable confidence.”