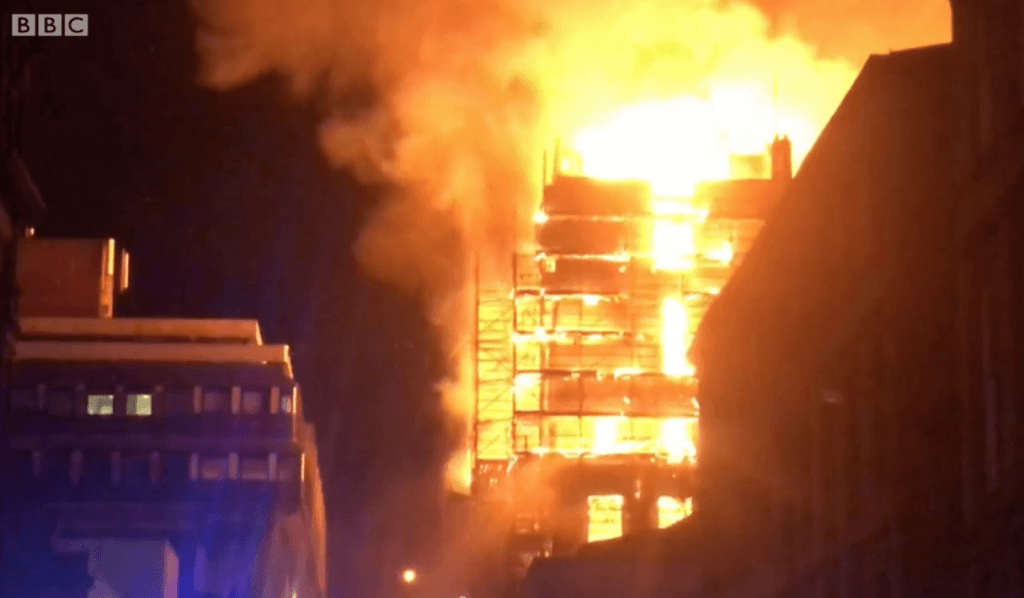 Glasgow School of Art has been gutted by a second blaze four years after part of the building was destroyed by fire.

There were fears that the internationally-renowned Charles Rennie Mackintosh masterpiece has suffered irreparable damage in the fire which took hold at about 11.30pm on Friday.

Nearby buildings, including the Campus nightclub and O2 ABC music venue, also suffered “extensive damage”. There was not thought to be any casualties.

More than 120 firefighters fought to save the art school which has been undergoing a £35m restoration following the fire in 2014 which destroyed the historic library.

This time the entire interiors appeared to be alight. Deputy Chief Officer Iain Bushell said: “This is an extremely challenging and complex incident, but the response and professionalism of our firefighters has been exceptional. 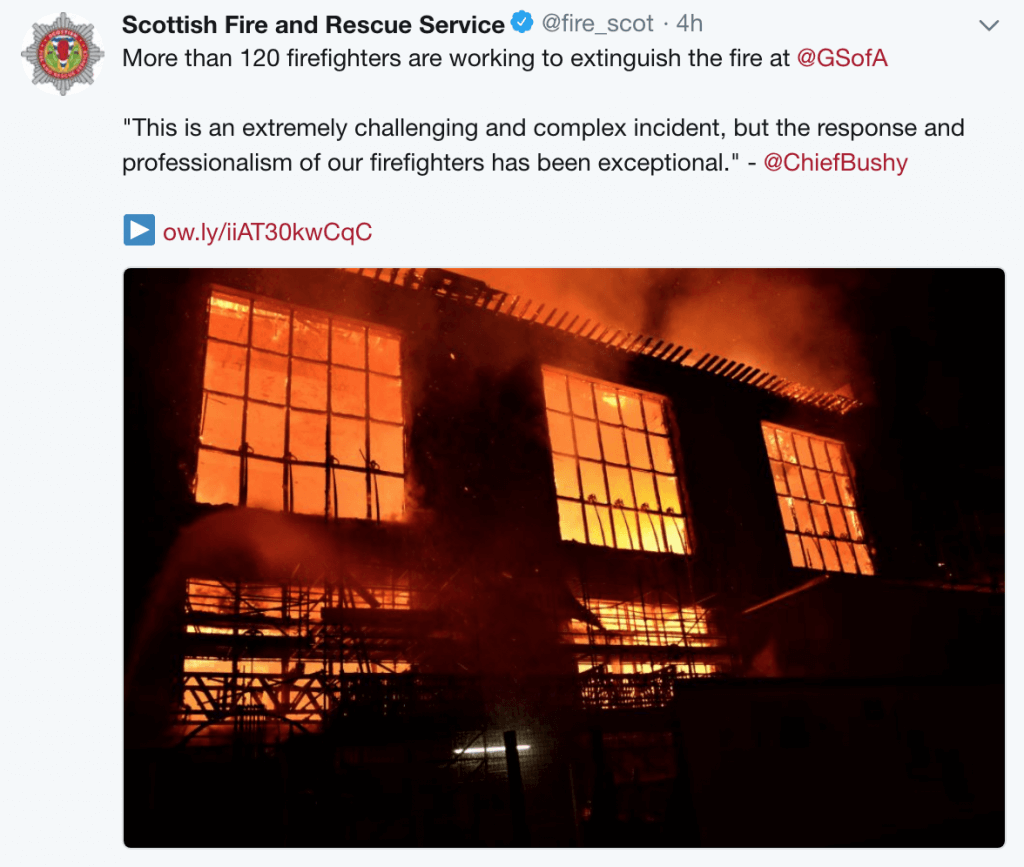 “This will be a prolonged incident and crews will remain on the scene as they work to prevent further fire spread and damage.”

Rachael Docherty, 29, is a former graduate of the art school and told the Press Association: “This is terrible. This is a lot worse than the last one.”

Graduation ceremonies had taken place earlier on Friday. Honorary Doctorates were awarded to Sam Ainsley, David Harding and Sandy Moffat as well Juliet Kinchin, curator of design at the  Museum of Modern Art in New York, who has published books and helped organise exhibitions with particular emphasis on the Glasgow Style associated with Charles Rennie Mackintosh,

Last night First Minister Nicola Sturgeon expressed her dismay at the second fire to hit the art school. She said in a tweet: “This is clearly an extremely serious situation.

“My first thoughts tonight are for the safety of people – but my heart also breaks for Glasgow’s beloved @GSofA.

“Once again, we are indebted to the bravery of our firefighters and other emergency services.”

Secretary of State for Scotland David Mundell, who had visited the building only two weeks ago, said he was “devastated”.

Paul Sweeney, Shadow Scottish Secretary,  said the Mackintosh Building was the “most architecturally important building” in the city. 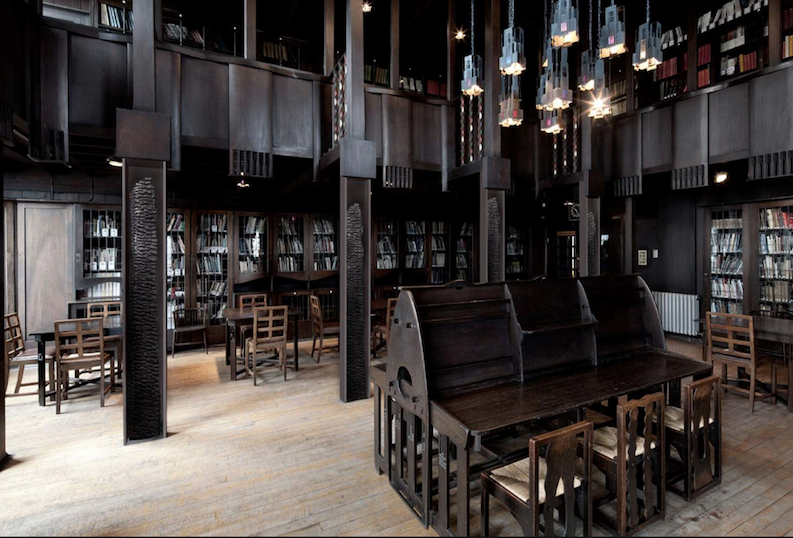 The library was a unique example of Mackintosh’s work

He added: “The best we can probably hope for is structural facade retention and a complete rebuild of the interior. Devastating.”

It was built between 1897 and 1909. The fire in 2014, caused by a faulty projector, destroyed the library, which was recognised as being one of the finest examples of art nouveau in the world.

This latest blaze comes just weeks after fire ripped through a nearby nightclub which had to be torn down.

Traffic diversions have been in place since that blaze in March and further disruption can be expected. The exit at Junction 18 to Charing Cross from the M8 westbound was closed. Sauchiehall St, Holland St, Bath St, Hill St, Scott St & a large number of surrounding roads have been affected.

The 2014 blaze caused significant damage to the west wing, including the loss of the celebrated Mackintosh Library, and the first stage of the restoration was to fit a temporary roof over the site.

A full-scale model of part of the library was later built to test if the original materials and techniques from Mackintosh’s 19th century design could be used in its reconstruction.

Kier Construction Scotland was managing the project with design led by Page/Park architects. It won support from around the world including Hollywood star Brad Pitt and Doctor Who actor Peter Capaldi, a former student, and international artists  Grayson Perry, The Chapman Brothers and Sir Peter Blake.

The restoration team sourced wood from the US which was the same age as that used in Mackintosh’s 19th century design.

Work was due to be completed in February next year.