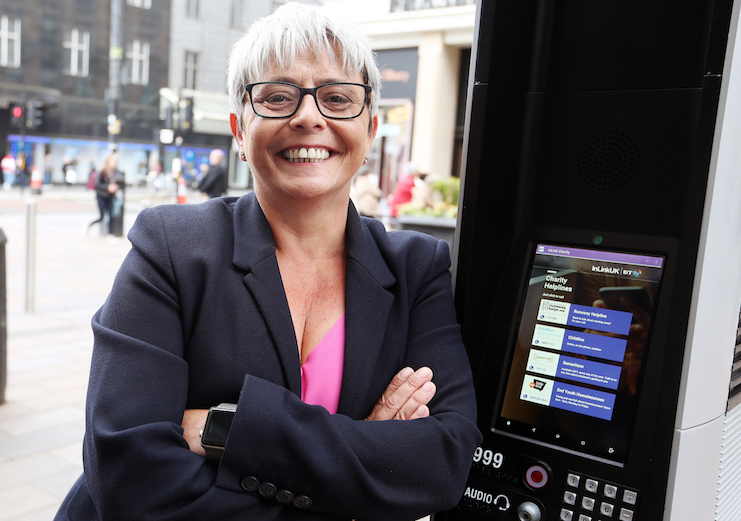 Annie Wells at one of the new link machines

Glasgow is the first Scottish city to join the InLinkUK service offered by BT, which already has 100,000 subscribers and offers the UK’s fastest free public wi-fi.

The first 12 InLinks being installed in the city centre can deliver ultrafast wi-fi speeds of up to one gigabit per second (1Gbps).

Free phone calls to UK landlines and mobiles, charging points for mobile phones and access to the BT Phone Book are also available.

Glasgow is the second city outside of London to benefit from the new service, and its launch marks the first anniversary of the first UK InLink being activated in London. InLinks mean more space on pavements, as on average, they replace two standard modern phone boxes. BT’s iconic red phone boxes are not affected.

This new communications service in the heart of the city will cement Glasgow as one of the UK’s most digitally connected cities.

The UK rollout has so far seen nearly 150 InLinks installed in eight London boroughs and Leeds city centre, with hundreds more to be installed across the UK. Since the first InLink was installed in June last year, more than 100,000 people have subscribed to the service’s free wi-fi, using enough data to download the equivalent of over 12 million songs. The InLinks have also saved users more than £352,000 in free calls, with 33,000 calls being made on average every week.

The InLinks also offer additional digital services, including being accessible to those who have a visual impairment and want to use TalkBack. One of the InLink’s newest features is its free one-touch lifelines to four national charities. Free calls can be made via the tablet to Childline, End Youth Homelessness, Runaway Helpline and Samaritans.

The community and Glasgow City Council are also benefiting from the digital displays on the InLinks that run real-time information, including the weather forecast and other local information. All of these services are provided to the community at no public cost, as the project is funded by advertising revenue. Each InLink provides more than 1,000 hours of local messaging a year, acting as a community notice board for the local area.

Annie Wells, MSP for Glasgow, unveiled the first Glasgow InLink. She said: “It’s fantastic that Glasgow is the first Scottish city to be chosen by InLinkUK and BT as the home for this exciting state-of-the-art digital technology.

“Glasgow has such a vibrant city centre and from my days working in Argyle Street to days spent shopping and eating in its many great restaurants, it has always retained its true character. Allowing people to access information and support helplines free of charge will add much to a city already bursting with creativity and entrepreneurial spark.”

Neil Scoresby, BT’s general manager for payphones and InLinkUK, said: “Today’s launch in Glasgow brings the fastest free public wi-fi in the UK to Scotland. Residents and visitors alike are set to benefit from this new state-of-the-art ‘phone box’, where they can also make calls for free, access local information and even charge their ‘phone when out and about.”

Matt Bird, general manager for InLinkUK, added: “Glasgow marks an important milestone in the national InLink rollout. With the introduction of the InLinks in the city, Scotland becomes the second nation in the UK to welcome this digital evolution. We are making great progress in our journey of creating smart communities, and with the InLinks offering free ultrafast wi-fi and a host of other free digital services, we are well on our way to achieving this in key UK cities.”

InLinkUK from BT is a partnership between BT and tech start up InLinkUK.