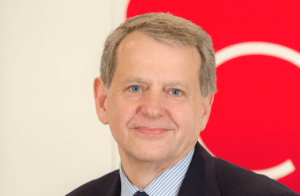 CYBG, owner of Clydesdale and Yorkshire Banks, is strengthening its agriculture service through the appointment of a head of sector who joins from the industry.

Brian Richardson will take on the role in July, leaving his position as chief executive of at H&H Group, in Carlisle.

Born and raised in Yorkshire, Mr Richardson has spent his career in the agri-business sector, starting as a management trainee at a feed milling and meat processing company in Harrogate. He went on to hold senior positions, including managing direction at JSR Farms in East Yorkshire, chief executive at Woldmarsh Producer and managing director at CWG before joining H&H Group as chief executive in 2008.

Mr Richardson is also a Nuffield Scholar, with his area of research focusing on farming cooperatives in Europe and New Zealand.

Mr Richardson said: “It’s unusual to have someone from industry move into the financial side, but I’m excited to get started. It’s a big commitment from CYBG to invest in this role and shows the long-term view it takes and importance it places on this sector.

“It’s an interesting time to be joining a bank – major changes in agriculture and the wider food and drink sector will happen as a result of Brexit and, for the first time in more than 40 years, the UK Government will be setting its own policy for agriculture.”

Vahey to head up policy development at AJ Bell