Few mergers come without the inclusion of a few phrases loved by lawyers and City types, and that old chestnut ‘synergies’ is chief among them.

Cuts or savings to you and me, the synergies in the merger of Clydesdale and Yorkshire Banks with Virgin Money are pretty hefty: £120m a year and 16% of the workforce, equating to about 1,500 jobs.

It’s bound to mean more branch closures, and it looks like the red flag will not be flying over Virgin Money’s office in St Andrew Square, Edinburgh, for much longer.

The message is clear: CYBG and Virgin are celebrating the creation of Britain’s sixth biggest bank to challenge the established gang of five – Barclays, HSBC, Lloyds, RBS and Santander – but not everyone is invited to the party.

There must also be questions over how long Virgin Money CEO Jayne-Anne Gadhia will stay on as ‘adviser’ to the new group CEO David Duffy. In these days of gender equality she was a good bet to get the top job, but I’m told Duffy has regarded this as a vanity project, a crowning moment in his banking career. CYBG bagged all three top jobs – chairman, CEO and CFO – making it  clear that this ‘merger’ was nothing less than a takeover.

However, it is also clear that the acquired business is a more valued asset than the acquirer and the Clydesdale team must be laughing all the way to the bank – so to speak – having achieved a step change in its ambitions by snapping up one of the best known names in British corporate life. 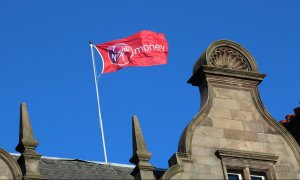 Virgin gets to retain the former Northern Rock offices on Tyneside and Sir Richard Branson picks up a £15m annual bonus for licensing the Virgin name which is regarded as the preferred brand for the new bank. CYBG, which was only ever the name of the holding company, is so undistinguished that one City commentator referred to it as CYGB.

Sadly, Clydesdale’s long history has counted for nothing and, along with the equally illustrious Yorkshire name, it will join a growing list of doomed Scottish financial services names like Scottish Equitable in whose offices, ironically, Virgin Money is now based. At least for the time being.

Despite their longevity, neither the Clydesdale nor Yorkshire names just don’t pack a punch on the UK stage compared with Virgin which carries greater brand recognition.

More to the point, Virgin has managed to survive two decades of upheaval, including financial crises and technological change, with a brand that has positive connotations for consumers. In the banking world, it is difficult to put a price on that: or maybe it’s the price Sir Richard has squeezed out of the Goldman Sachs-led negotiators to surrender his bank, if not its name, to its Scottish predator.

Duffy and co, who are pressing the virtue of ‘scale’, must now prove they can make the new larger combination work against calls in recent years for banks to be broken up.

Short term that means sorting out Virgin’s risky zero-interest credit cards, but it will also mean avoiding the sort of debacle that engulfed the ambitions of the last next-big-banking-thing, namely TSB. It was demerged, floated and acquired in a flash. Then came the IT fiasco. Let’s pray that CYBG-Virgin has a kindlier baptism.