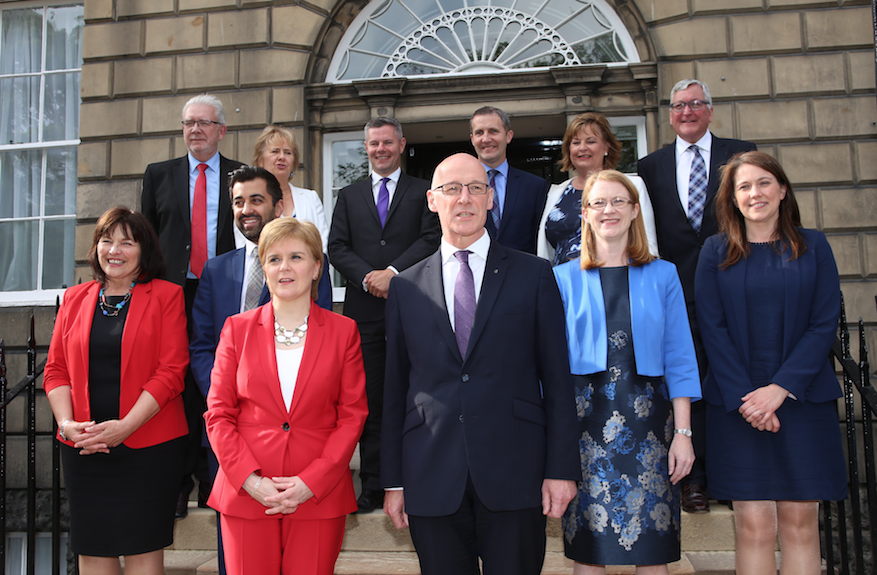 Economy Secretary Keith Brown, the party’s depute leader, is to leave the Scottish Government as part of of a reshuffle by First Minister Nicola Sturgeon.

Mr Brown willl take on the role of campaign director for the SNP to prepare the party for future elections. His role as Economy and Fair Work Secretary becomes part of a wider remit for Finance Secretary Derek Mackay.

Cabinet has expanded from 10 to 12 ministers with a 50:50 gender balance. Apart from the promotion f Ms Freeman, Brexit minister Michael Russell joins the Cabinet as Government Business and Constitutional Relations Secretary.

Mr Brown will have responsibility for policy development, preparation for future elections and building the case for Scotland to become an independent country. There was no word on his replacement in the economy department.

As the first dedicated depute leader in a decade, he will also take on some of the functions currently undertaken by the party leader, including chairing regular meetings of the political cabinet.

Mr Brown’s responsibilities will include preparing the party for a possible snap UK General Election, developing and helping to communicate and win support for the case for independence.

This will start with a series of National Assemblies to discuss the Sustainable Growth Commission, engaging with members, branches and external stakeholders across the country, and building the policy and campaign platform for the 2021 Holyrood elections.

In his enhanced depute leader role, Mr Brown will be supported by a team of MPs and MSPs who will be appointed in the coming days, and report directly to the party leader.

First Minister Nicola Sturgeon confirmed that Derek Mackay will stand down as business convener after seven years, following the SNP conference in October.  The party leader’s nomination of a new business convener – the chair of the National Executive Committee and national conference – will be announced in the autumn.

Ms Sturgeon said: “Keith has done an excellent job as a government minister over many years and has many achievements that he can be very proud of, including overseeing the construction of the magnificent new Queensferry Crossing.

“However, he and I have decided that the time is right to ensure that the energies of the SNP leader and depute leader team are focused not just on delivering a strong SNP Government, but also a party operation that is from top to bottom, fit and ready for the opportunities that lie ahead.

“Keith’s decision to be a dedicated depute leader will enable him to steer the party’s policy development, engage and motivate our expanded membership, get us ready for future elections, and develop the case for independence.

“To ensure we can deliver the best future for Scotland we must be ready for a snap UK election at any time, and we must also begin the hard work of building a policy platform on which to seek the support of the people of Scotland in the next Holyrood election.

“We must also make sure that the voice, expertise, energies and ideas of our expanded membership are harnessed.

“All of that would be a big enough job, but with more and more people open to the case for independence it is also essential that we focus time, energy and resources on building the arguments for independence and engaging people across the country in discussion about why it is the best future for Scotland.


“As depute leader of the SNP, and one of our most experienced politicians, there is no better person to lead that work than Keith Brown.”

Mr Brown added: “It is a huge honour to have been elected depute leader of the SNP and I want to give my all to the role.

“Over the last few weeks, the public outcry over the Tory power grab has led to a further increase in our party membership and a refreshed debate about independence – and so it has become clear to me that we must capitalise on this moment.

“The First Minister and I have agreed that, as part of the leadership team, I should dedicate my time and energy to the role of depute leader – effectively becoming the standing campaign director of the party – and lead work to build our policy platform, ensure we are ready for an early general election should it happen, build and strengthen the case for independence and start to lay the foundations for the 2021 Holyrood election.

“In the coming days we will be appointing a team of MPs and MSPs to support this work and put the party on a campaign footing.

“While my constituency will always come first, serving as a Government Minister has been a huge honour, and I am particularly proud to have helped deliver the iconic Queensferry Crossing, the hugely successful Borders Railway and to have served as veterans minister, representing our veterans community inside government.

“This is a hugely exciting time for the SNP and I am relishing the opportunity to get the SNP ready for the campaigns and opportunities that lie ahead.”