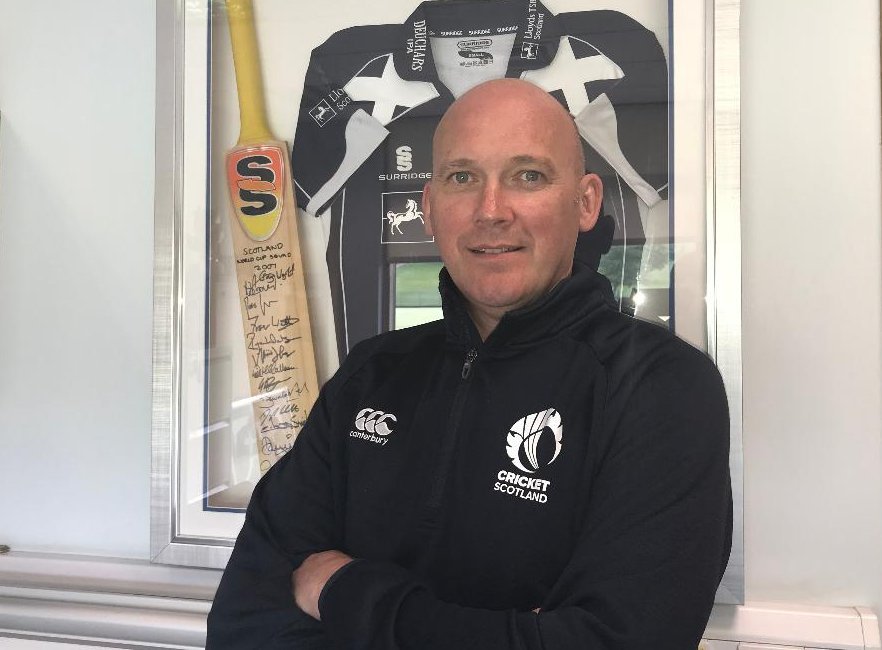 Malcolm Cannon says Cricket Scotland is ready to put on a show when England and Pakistan visit The Grange (pic: DB Media Services)

Scotland’s cricketers have the chance to underline their emergence onto the global stage when England and Pakistan visit Edinburgh for high-profile internationals.

The Scots missed out on qualification for next year’s World Cup when the West Indies prevailed in a controversial encounter in Harare two months ago.

A questionable umpiring decision and then torrential rain conspired to shatter the dream just as Kyle Coetzer’s men appeared to be on course to win the decisive tie.

Had sympathy votes counted, then participation next summer in England would be a given. It was not to be, however there remains much for the sport to look forward to in this country.

There is much anticipation, therefore, surrounding not only the sell-out one-day international against a star-studded England team on 10 June, but the two T20 games against world No. 1 Pakistan on 12 and 13 June.

“Qualifying for a ten-team World Cup would really have put us on the map,” said Cricket Scotland chief executive Malcolm Cannon.

“We have shaken up the world of cricket. We should have won that game against the West Indies and they know we should be going to the World Cup and not them. When in the history of Scottish cricket would that statement have ever been true?

“We have to use it as a positive springboard. It has raised the profile of Scottish cricket on the world stage and I think the ICC see Scotland as a good investment. They have pumped a lot of money into the sport through the core grants we get from the global governing body as has the Scottish government through our sportscotland funding.”

Qualification for the World Cup would have brought a $1million reward from the ICC, but Mr Cannon was at pains to stress the organisation hasn’t suffered financially as a result.

He said: “We had never budgeted for that so despite some reports saying this had been a massive hit to our finances, it wasn’t. It was just an opportunity cost. Qualifying gets you $1million from the ICC essentially paid as preparation fees for the World Cup but over a few years to allow some legacy.

“It wasn’t to be but that doesn’t mean we took a ‘hit’ or that anything is at risk. It would have been a bonus.”

The upcoming internationals are the culmination of 18 months’ hard work by those behind the scenes and there has been little time to dwell on the Harare heartbreak.

Nothing ventured, nothing gained, could have been the motto as Cricket Scotland set about putting the foundations in place for the upcoming festival of cricket in Scotland’s capital.

Costing around £100,000 to stage each of the three matches and with up to 12,000 spectators expected at The Grange, officials know they have to deliver on and off the pitch.

“There’s a risk but it’s important for the profile of the game,” said Mr Cannon, now three years into his role.

“These are all massive opportunities and while it is all done on a risk basis, we need to back ourselves to put ourselves out there.

Speaking exclusively to Daily Business, he added: “Hosting these games is not only difficult to achieve politically but also financially there is a risk as there is a substantial cost to host these teams from travel, accommodation, etc.

“We need to recoup that but don’t have the ability to sell massive broadcast rights as these are effectively friendlies.

“This is a first for Scotland in the world of cricket. We are hosting the world’s No. 1 ranked sides in the two white ball formats of the game over a four-day period.

“We are hosting up to 12,000 people which is way beyond anything we have contemplated before.

“We need to get bums on seats and I hope the Scottish sporting public and the corporate public rise to the occasion and support the team. These events don’t come along very often.

“The Grange is one of the most beautiful grounds in the world for international cricket. I believe if people turn up and have a great experience they will come back. We have to try to provide a memorable experience and I am confident we can do that.”