Calls for a central bank, regulation and growth plan 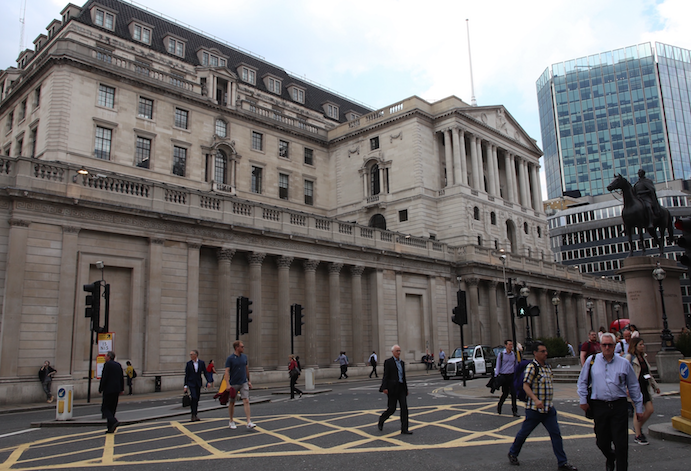 An independent Scotland would take on functions of the Bank of England (pic: Terry Murden)

A blueprint for Scottish independence recommends the retention of sterling, setting up a central bank and the transfer of financial regulation to Scotland.

A Scottish Central Bank and Scottish Financial Authority would assume the functions of the Financial Conduct Authority and Prudential Regulatory Authority which regulate and supervise banks and investment firms.

The SCB would take on the Bank of England’s role as a lender of last resort and “provide emergency liquidity assistance to the banking system where there is a systemic need”.

Bankers have in the past questioned whether Scotland’s financial system was capable of taking on this role in the event of another meltdown. Sir Philip Hampton, during his chairmanship of Royal Bank of Scotland, said for this reason the board would consider relocating to England.

However, the SCB would introduce rules on capital structure and asset quality on retail banks to ensure that adequate collateral is available to match retail deposits in such banks. It says “financial support should only be provided to the ring-fenced retail entities operating in Scotland.”

There is no clarification of the proposed Scottish Central Bank’s role in defining monetary policy, including interest rates, though the link to sterling may mean this would remain with the Bank of England.

The proposals are among 50 recommendations in the 353-page report from the Sustainable Growth Commission, published in full today.

It also proposes incentives to encourage overseas workers to live, study and work in Scotland.

The Commission recommends that the currency of an independent Scotland should retain the pound sterling for an extended transition period.

It recommends six tests for a future decision on a Scottish currency to be based upon: i. Fiscal sustainability ii. Central bank credibility and stability of debt issuance iii. Financial requirements of Scottish residents and businesses iv. Sufficiency of foreign exchange and financial reserves v. Fit to trade and investment patters vi. Correlation of economic and trade cycle.

The report calls for the setting up of a Productivity Commission to identify opportunities for improvement. It says an Infrastructure Commission should be established to provide strategic advice, based on a research programme, to align investment with long term economic development aspirations.

An Export Growth Strategy would be created “urgently” in consultation with the main exporting sectors, companies and potential exporters especially in smaller companies. The report says “the aim of this strategy must be to dramatically increase the value of exports overall and to diversify the source of export income very considerably as countries such as Ireland have achieved in recent decades.”

It says the promotion of Scotland’s exports should be a central part of the marketing effort of the country alongside migration encouragement.

Measures could include the following:

– establish a Ministry for Trade and Foreign Affairs to oversee a new and heavily integrated approach to trade, investment and economic diplomacy;

– build a new embassy and consular network with economic diplomacy as its core purpose and with the ability to help harness and direct all of Scotland’s international activity;

– retain the link between internationalisation and wider business support through the enterprise networks but with increasing emphasis on, and incentivisation of, growing the number of domestic firms engaged in exporting activity

– establish a stronger, better funded inward investment agency with an independent and high level board including representatives of indigenous and investor business communities

– provide financial support mechanisms for exporting businesses e.g. export credit guarantees that are at least as generous as those provided in comparator nations

Membership of the Sustainable Growth Commission: