Anger at 'failure' to listen 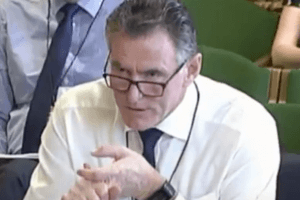 MPs from all parties rounded on RBS executives after the pair showed little willingness to change their policy on branch closures.

RBS intends to close 62 branches in Scotland, although it is reviewing the future of 10 following pressure from politicians and local communities.

CEO Ross McEwan (pictured) told members of the Scottish Affairs Committee that the decision to close branches had “not been taken lightly”, but said evidence brought to light by “changing customer behaviour” is “stark”.

He added that bank branches remain a “core part” of the service offered by RBS, and assured MPs that the bank will not look again at branch numbers in Scotland until 2020.

The bank is introducing branches in vans which tour rural villages but this service has also come under fire after the bank reduced the frequency of some visits.

Jane Howard, from RBS’s personal banking service, said the branches scheduled for closure were selected on whether they were the last bank in town, or more than nine miles from the nearest RBS branch.

Liberal Democrat Edinburgh West MP Christine Jardine did manage to secure a meeting with Mr McEwan to discuss plans to set up shared banking hubs and the future of services in rural areas.

She said: “People deserve better than these closures. That is why Liberal Democrats have proposed plans to set up banking hubs, where banks could pool resources together and ensure services can remain open.


“I am pleased therefore Mr McEwan has agreed to facilitate a meeting with me to discuss these plans. The UK Government should also sit up and listen and give these proposals serious consideration.”

But her fellow committee members expressed their dismay at the lack of progress on the issue.

RBS personal banking chief executive Les Matheson said the bank is helping rural communities and would be happy to talk to Mr Lamont’s constituents “one on one”.

Mr Lamont replied, saying  local communities who helped bail out RBS have been “let down”.

Labour’s Hugh Gaffney said he had heard of “pressure” put on staff to sell banking apps in RBS branches. Mr McEwan defended the move by saying it had to help customers “stay connected in this very digital world”.


Afterwards, SNP MP Deidre Brock said that RBS “failed to answer” many questions and said it was disappointing that RBS had  failed to listen to the anger and frustration voiced by so many of the customers and business hit by the branch closure plans.

Labour MP for Rutherglen and Hamilton West Ged Killen, said: “The answers given by Mr McEwan to the committee this morning were vague when we wanted specifics and focused on specifics when we asked for the bigger picture.

“It is wishful thinking on RBS’s part to think that online, telephone and mobile banking can fill the gap left by lost branches.

“RBS tell us that they are customer-focused but pressing ahead with these unpopular closures flies in the face of that. They also tell us that profit is not the motivation here and that the closures will only save £9.5million. If that is true the closures make even less sense.

“That is a drop in the ocean for a bank which made a pre-tax profits of £1.2billion in the first quarter of this year, yet risks doing untold damage to communities across Scotland.”

Labour MP for Midlothian Danielle Rowley said: “The reassurances given to communities in my constituency on mobile banking look rather hollow when they are able to look to other areas such as Fife where similar promises have already been broken.”