Mr McRae has been appointed policy chairman at the Federation of Small Businesses (Scotland). He succeeds Andy Willox, who is stepping down after 16 years.

Mr McRae and his wife Alice employ 20 people in their Museum Context shops in Edinburgh and a further ten staff in a shop in Hong Kong.

They gained international media attention with their Victoria Street shopping experience which celebrates the world of Harry Potter. The shop was mobbed with visitors when it opened last summer during the Edinburgh Festival.

He said: “It is a great privilege for me to take stewardship of the FSB’s campaign work in Scotland. My intention is to build upon Andy’s impressive record. His passion for local firms is legendary.

“Scotland’s small and growing businesses can help drive economic dynamism across the length and breadth of Scotland. I’m looking forward to making the case for Scotland to be the best place in the world to start, run and grow a small business.” 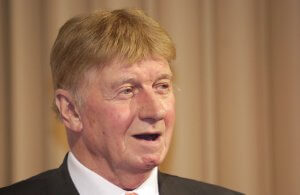 Mr Willox, right, said: “Leading the FSB’s campaign work since the early years of devolution has been a tremendous honour. While Scotland has changed substantially since I took office, what hasn’t changed is the need for the FSB to defend small business interests and celebrate their contribution to our economy and society.

“In Andrew McRae, I have a formidable successor who I’m confident will utilise FSB’s network of committed volunteers and dedicated staff to make the case for local businesses and the communities they support.”

He will help his son, Scott, and daughter-in-law, Rachel, in the business he founded – Goldstar Cleaning in Aberdeen – which employs 160 staff and will continue to play an active role in discussion about the future of the North East.

She said: “I commend his work with the FSB over the past 16 years to put smaller businesses at the heart of economic and political debate in Scotland and wish him well for the future.

“Scotland’s small companies are critical to the nation’s economic success, as well as fulfilling an important role in the social fabric of local communities and the Scottish Government will continue to work closely with the FSB to ensure our policies support SMEs.

“I wish Andrew McRae every success in his new role as FSB chair and I look forward to meeting him again soon.”

Ms Sturgeon revealed that nearly eight out of ten public sector contracts in Scotland are now awarded to small and medium businesses as a result of Scottish Government legislation.

There has also been a sustained increased in the transparency of procurement, with many more contract opportunities advertised online. Since 2014, the number of contract awards recorded on the online portal has risen 46%.

Ms Sturgeon said: “The implementation of the Procurement Reform Scotland Act two years ago required public sector organisations to take action to make sure their procurement practices were open to SMEs.

“And the steps we have implemented are having a positive impact, as demonstrated by the welcome increase in public sector contracts being awarded to small businesses.

“In total, 50% of public sector spend on procurement in the last financial year went to SMEs. That’s well over £5 billion.

“The value and quality of the services provided by small businesses isn’t simply something this government is praising in our rhetoric; it’s something we are recognising in our purchasing practices.”