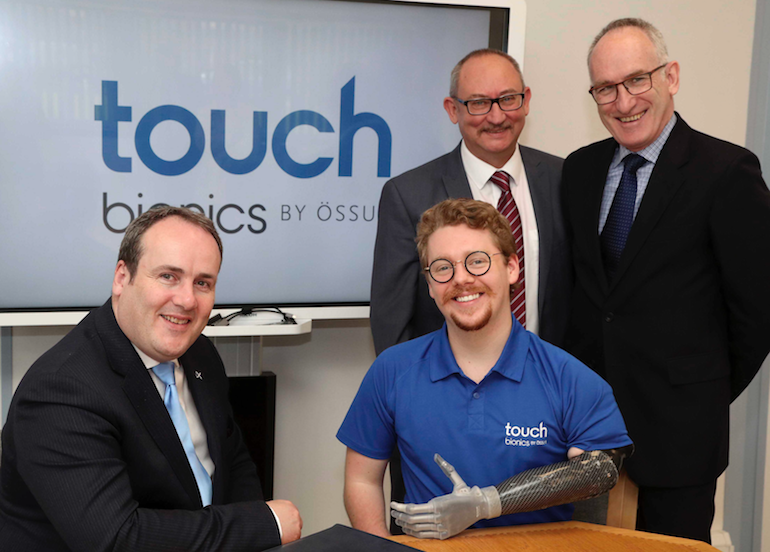 Prosthetics company Össur is investing £5.6 million over a three year period to develop ground-breaking prosthetic limbs at its plant in Scotland.

The Iceland-based company’s investment in Touch Bionics’ Livingston facility, which it bought in 2016, is supported by a £1.3m grant from Scottish Enterprise.

During a visit, Scottish Business Minister Paul Wheelhouse, said the government would continue to back innovations in life sciences. The Programme for Government saw business research & development grants boosted by 70%.

“Encouraging companies to invest in innovation and increase their international reach is a priority for us, and Touch Bionics with its ground-breaking work in prosthetic technology is a fantastic example of this.

“The company is working with Scottish Enterprise in a productive collaboration, supporting its drive to expand its global business here in Scotland and bring its plans to fruition.”

Hugh Gill, vice president of R&D at Touch Bionics, said funding from Scottish Enterprise had directly contributed to the transformation of upper limb prosthetics over the past decade.

Michael Cannon, head of innovation and enterprise services at Scottish Enterprise, said: “Helping more companies to invest in innovation to help grow their business and increase their international activities continues to be a priority for us.”

During the visit, Mr. Wheelhouse had the opportunity to meet university student Patrick Kane who wears an upper limb prosthesis from Touch Bionics. He was elected as a torchbearer for the London 2012 Olympics.