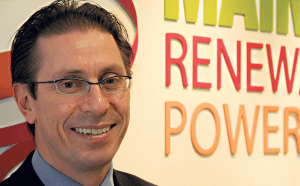 It was approved after a long legal battle with the Royal Society for the Protection of Birds and has grid connection agreements in place. Commissioning is planned for 2023.

EDF is acquiring it via EDF Renewables, a joint subsidiary of EDF Energy and EDF Energies Nouvelles.

No value on the deal was disclosed but Mainstream’s equity stake was valued at €100 million when the Irish company initially tried to sell it before the RSPB action. It was put back on the market earlier this year. and it is thought it may have been sold for a considerably higher price.

“It confirms EDF Group’s wider commitment to renewables in countries where EDF already has a strong footprint such as the United Kingdom. The project is consistent with the CAP 2030 strategy that aims at doubling EDF’s renewable energy generation by 2030.”

Mainstream Renewable’s chief executive Andy Kinsella said: “We are very pleased to be bringing in such an established partner and supporter of the Scottish energy industry in EDF Renewables to this vital infrastructure project for Scotland.

“The completion of this sale adds to Mainstream’s global track record as the leading independent developer of some of the most significant and complex wind and solar projects across Europe, South America, Africa and Asia.

“The Neart na Gaoithe offshore wind farm has been fully developed by Mainstream and we are delighted to be handing over this world-class project.”

Simone Rossi, CEO of EDF Energy said: “This is evidence of our continuing investment and growth in Scotland, where we are the largest generator of low carbon energy. Our operations contribute £389m to the Scottish economy every year and we employ more than 2,800 staff and contractors. We supply 144,000 customers in Scotland.”