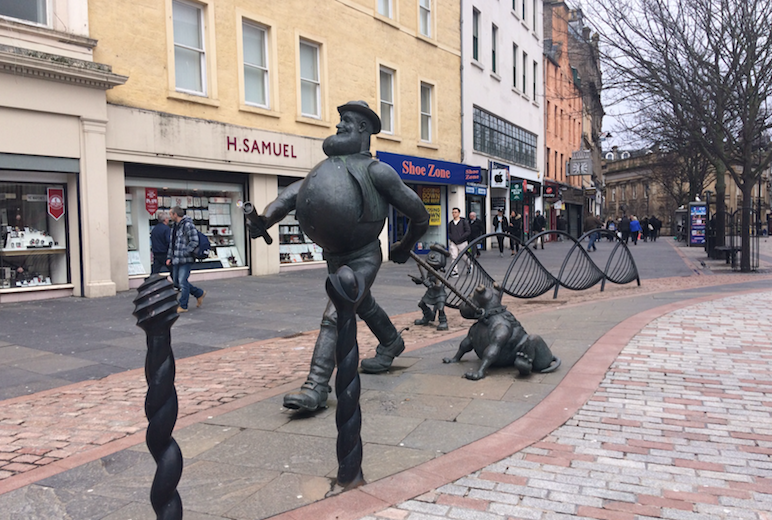 Not so desperate: the city’s reputation is growing (photo by Terry Murden)

Dundee has confirmed its reputation as one of Scotland’s tourism hot spot after being included on an exclusive list of must-visit cities.

Travel authority, Lonely Planet has today revealed that Scotland’s fourth largest city, has been picked as one of its top European destination for 2018, the only UK city to make the list.

Praised for its ‘growing cultural scene and the exciting transformation of the city’s historic waterfront’, the Lonely Planet accolade follows similar recommendations from prestigious outlets such as The Wall Street Journal, CNN, Bloomberg and the Guardian.

The opening of V&A Dundee in September, combined with a number of other high-profile redevelopments, is set to propel the East of Scotland into the global spotlight.

In response to Dundee’s addition to the Lonely Planet Best in Europe 2018 line-up, Tourism Secretary Fiona Hyslop said: “This is a deserved accolade for Dundee, and further evidence of the city’s growing reputation as a top tourist destination.

“The Open Championship at Carnoustie, and the opening of the V&A – which is backed by Scottish Government funding – make 2018 a big year for tourism in Dundee and the wider Angus area.“

Malcolm Roughead, VisitScotland Chief Executive, said: “It’s great that through its Best in Europe list Lonely Planet is highlighting exciting destinations that visitors may not have thought to explore.

“With the arrival of V&A Dundee, the city is fast becoming the star of the Scottish travel scene and thanks to accolades like this one, more and more people will discover what we have known for some time, that Dundee is a must-visit destination.

“We need to create world class experiences, events and attractions to keep up with ever-changing visitor demands. The city represents the very best of modern Scotland. It is home to welcoming people, a thriving creative scene, exciting new businesses and a diverse range of fascinating attractions. This is an exciting new chapter for tourism in Dundee, the excitement is palpable and the tourism industry is working hard to capitalise on this unmissable opportunity. Now is Dundee’s time to shine. Now is the time for the world to discover Dundee.”

Councillor John Alexander, Leader of Dundee City Council said: “Being on Lonely Planet’s definitive list of 10 places in Europe that people should visit in the next 12 months is a tremendous badge of honour and is fitting recognition of the work that so many people have put in over so many years to get us to where we are now.

“Partnerships between public, private and third sector agencies and joint working in teams combining art, science and balance sheets has been a hallmark of putting Dundee well and truly on the destination map.

“We are just over half way through a 30 year masterplan to completely transform the waterfront and re-connect the Tay with the heart of the city. Development land is already being earmarked for hotels, residential, retail and leisure uses by some of the world’s top brands including AC by Marriott.

“We’re a thriving cruise ship destination, a hub for creative industries, media and life sciences and a UNESCO City of Design that is committed to fairness and social justice. Dundee is determined to succeed and our ambitions for the city and its people are sky-high.”

Philip Long, Director of V&A Dundee, said: “Everyone working on V&A Dundee is absolutely delighted that our city has been featured in Lonely Planet’s Best in Europe list, alongside such other remarkable travel locations. It’s great recognition of what we’ve known for years – Dundee is a fast-changing, vibrant and exciting city for people to visit.

“Dundee has so much to offer visitors, even before V&A Dundee opens on Saturday 15 September, and the city is at the heart of a very beautiful region.

“We look forward to welcoming visitors to V&A Dundee from all other the world when we open this September.”