Board departure on eve of AGM 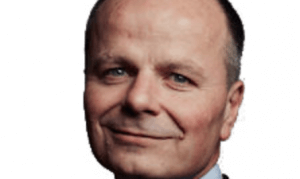 Royal Bank of Scotland’s recovery plan has been shaken after it announced this morning that chief financial officer Ewen Stevenson has resigned.

The date of his departure has not been decided but he will remain in his position “to oversee an orderly handover of his responsibilities”. The search for a successor will commence immediately.

His departure, on the eve of the annual general meeting, will cause some disruption to the ongoing task of rebuilding the balance sheet following the financial crash 10 years ago.

He was appointed four years ago and has worked closely with chief executive Ross McEwan to reshape the bank. He would have played a key role in returning the bank to the private sector.

The government is expected to announce this week that it will kickstart a planned sale of shares in the bank.

Chairman Howard Davies said: “The board and I are sorry to learn that Ewen has decided to move elsewhere.  He will go with our thanks for a job well done and our good wishes.”

Mr McEwan added: “For the past four years Ewen has worked tirelessly with me and my executive team to make RBS a much simpler, safer and more customer focussed business and to resolve a number of major legacy challenges.

“When Ewen leaves RBS he will go with my enormous thanks and best wishes, he has been a fantastic CFO.”

Shareholders will gather at Gogarburn today where the share sale and branch closures are expected to be among the topics raise.

The board has also updated its policies governing lending to the energy sector. These changes follow the bank’s substantial reductions in fossil fuel exposures and growth in renewables in recent years.

It comes amid growing interest in the role banks can play in tackling climate change. In March, RBS announced it was committing to provide £10bn of funding to the sustainable energy sector between 2018 and 2020 and that 80% of its energy project financing went to renewables in 2017.

The new policy changes being announced build on this momentum. Covering the mining, power and oil and gas sectors, they mean the bank will not provide project-specific finance to:

In addition, RBS is also tightening its restrictions on general lending to companies involved in coal, meaning it will not provide finance to:

– Mining companies generating more than 40% of their revenues from thermal coal – a reduction from 65%.

– Power companies generating more than 40% of their electricity from coal – a reduction from 65%.

RBS is a supporter of the Taskforce on Climate-related Financial Disclosures (TCFD) and these policy changes form part of its wider approach to tackling climate change, which includes its own direct emissions, support for green sectors and additional climate risk management measures.  The bank sources 90% of its UK and Ireland electricity from renewables and reported a 39% drop in its own CO2 emissions since 2014.  It has plans to develop further measures to help personal and business customers reduce their own emissions and energy costs.

Kirsty Britz, Director of Sustainable Banking at RBS said: “The RBS of 2018 is very different to the bank we were a few years ago. If we’re going to support our customers in the long run, then it means addressing the challenge of climate change and the risks and opportunities it presents.  We want to help build a cleaner, more sustainable economy for the future, and these policy changes form part of our broader approach to this major issue.”

“They also make RBS the bank with the strongest energy sector policies out of the top five UK banks. Based on this progress, RBS would now rank 8th in our climate ranking of the 15 largest European banks, up from 11th previously. This is an encouraging step forward in a relatively short space of time, and will hopefully inspire other banks to achieve similar progress.”

Ian Fraser: pain and punishment on the road to recovery