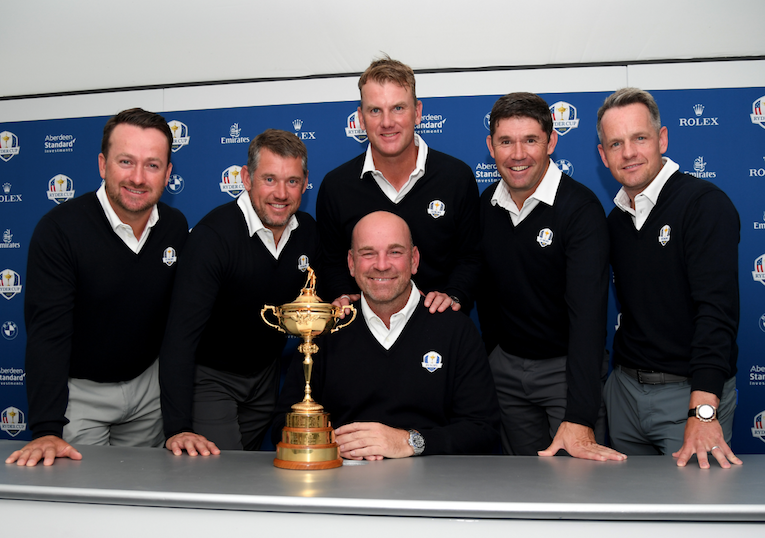 European Ryder Cup captain Thomas Bjorn and his five vice-captains are ready to take on the USA in France (pic: Getty Images)

The quartet will bring a wealth of knowledge and experience to the Dane’s support staff as the Europeans aim to atone for the defeat at Hazeltine National two years ago.

The quintet have 26 Ryder Cup appearances between them, amassing a grand total of 56 points for Europe over a 19-year spell from 1997 to 2016.

“I am delighted not only to make this announcement today but also in the knowledge that I will have people of the calibre of Luke, Padraig, Robert, Graeme, Lee alongside me at Le Golf National,” said Bjørn.

“All five are widely respected throughout the game, are all current players who are well known to the players who will be in our team come September, and they also all possess a knowledge and understanding of what to expect from the golf course at Le Golf National, too.

“You only need to look at the record books to see that their Ryder Cup pedigree speaks for itself. Each of them has played both home and away so they are well versed in the contest and know how to handle the special and unique atmosphere.

“They all possess strong personalities but each of them will also bring something different to the team, giving us great balance. They have forthright opinions which is vital under the spotlight of a Ryder Cup week and is something which can only help our cause as we try and regain the trophy.”

The 42nd staging of the contest will be held from September 28-30 over the Albatros Course of Le Golf National in Saint-Quentin-en-Yvelines, a suburb southwest of Paris, and the hosts will be looking to extend an impressive winning record on home soil which stretches back to Valderrama in 1997.