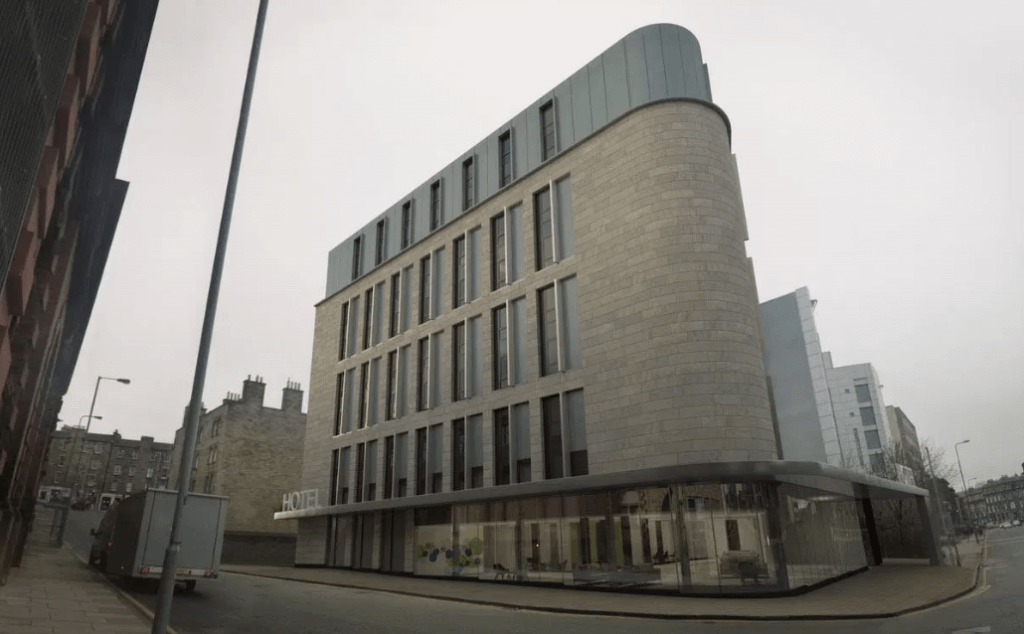 Progress has been made filling two long-standing gap sites in central Edinburgh.

Work has begun on an eight-storey hotel on a vacant plot close to Edinburgh International Conference Centre (EICC). Ogilvie Construction has broken ground on the £18 million project at the corner of Torphichen Street.

The 4 star boutique hotel will adjoin the refurbished 40 Torphichen Street, a modern block between the EICC and Haymarket station. The 150-bedroom hotel is being built for Axcel Hospitality and is due for completion in early 2020.

Unlike its metallic neighbour, the façade will be mostly in a natural stone, complementing other buildings in the west end.

The city council is seeking a development partner to build 400 homes with shops and offices on the site of the former S&N brewery in Fountainbridge. Work is scheduled to commence early next year with the project fully developed by 2025.

The local authority owns 4.7 hectares of brownfield land, 1.2 hectares of which have already been used to build the Boroughmuir High School, leaving the remaining land for mixed-use development.

A development partner is now being sought to build housing in four blocks, comprising a mix of social housing and homes for sale. Retail and business units will also be included on the ground floors.

Councillors are looking at options for the site east of Gilmore Park, which has been designated for offices. A small area of land (0.57 hectares) is being sold to Vastint Hospitality BV.

An Energy Strategy for the site is also being developed, with the council aiming to introduce a district heating scheme if viable.

Consideration is also being given as to how the industrial heritage of the site can be celebrated, with a refurbishment of the adjacent former North British Rubber Company works into a new home for Edinburgh Printmakers already under way.