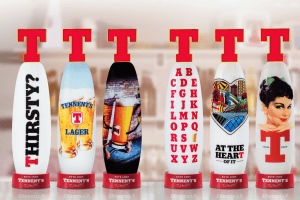 C&C, the Irish owner of Tennent’s, is in talks with AB InBev to acquire drinks distributor Matthew Clark and Bibendum for a ‘nominal sum’ from administrators which are expected to be appointed today.

The proposed acquisition is conditional upon the appointment of administrators to Conviviality Brands, the seller, which is expected to occur later today. A further announcement will be made later this morning.

Bargain Booze will not be included in the deal as it sits in Conviviality’s retail division, which is still being touted for sale.

Consideration for the shares will be a nominal sum, and C&C – which also makes Magners and Bulmers cider – will provide sufficient funds to support the on-going working capital and other cash requirements of the business.

In addition, AB InBev will provide additional financial support to the transaction. C&C’s investment will be funded from existing C&C facilities.

Matthew Clark Bibendum, which will have £102 million of working capital facilities, is the largest independent distributor to the UK on-trade drinks sector.

On 29 March, its parent company Conviviality, announced its intention to appoint administrators and to explore a potential sale of all or part of the business.

“C&C is pleased to be able to lead this industry-wide solution and bring stability to the business after the recent period of uncertainty,” it said in a statement this morning.

Matthew Clark Bibendum will be run as a separate business and C&C management believe the combination with C&C will:

Matthew Clark has a range of more than 4,000 products, including beers, wines, spirits, cider and soft drinks, sourced from in excess of 300 suppliers. Matthew Clark also has a number of exclusive distribution agreements for third party products (mainly wines) into the UK market and also has a limited range of own brand wines.

Matthew Clark has a nationwide distribution network of 18 depots and sales team of over 250 serving the independent free trade and national accounts as well as a state-of-the-art on-line ordering system.

In the latest audited accounts for the 52 weeks ended 30 April 2017, Matthew Clark Bibendum had gross revenues of £1,219 million and adjusted EBITDA of £51.3 million (pre central costs)1. However, in their trading update of 21 March 2018, the Board of Conviviality PLC stated that they expected that the adjusted EBITDA for the entire Conviviality group for the year ending 29 April 2018 to be in the range of £45.5 million to £46.0 million. Gross assets of approximately £230 million are expected to be acquired at completion.

Consideration for the shares will be a nominal sum, and C&C will provide sufficient funds to support the on-going working capital and other cash requirements of the business. In addition, AB InBev will provide additional financial support to the transaction. C&C’s investment will be funded from existing C&C facilities.

At completion, Matthew Clark Bibendum will have £102 million of working capital facilities provided by its current lender group, repayable in instalments over the 12 months following completion.

The transaction is expected to complete later this morning and a further announcement will be made in due course.

Stephen Glancey, C&C Group CEO, commented: “We know the Matthew Clark and Bibendum businesses very well. They are great businesses with unparalleled on-trade market access, a wide range of supplier relationships and supported by a knowledgeable and loyal employee base.

“The last few weeks have been challenging for employees, customers and suppliers alike. We hope today’s announcement can put an end to this period of disruption and uncertainty. We look-forward to working with our new colleagues and other stakeholders to bring stability and restore the group’s position as one of the leading and most respected drinks suppliers to the UK hospitality sector.”

“It’s an interesting move for C&C but perhaps not surprising given it has been trying to broaden its focus.

“Last year’s purchase of a 47% stake in Admiral Taverns gave C&C a foothold in the pubs sector in an effort to improve distribution of its products. The Conviviality deal would further strengthen its position in the distribution market.

“However, it is worth noting that C&C, which is best known for making Magners and Bulmers ciders and Tennent’s lager, has a patchy track record when it comes to making deals and generating value for its shareholders.

“For example, the purchase of US rival Vermont Hard Cider in 2012 for $305m caused a major hangover for C&C in the following years. Last year it reduced the carrying value of the Vermont business to a mere €45m ($55m).

“Shares in the business have fallen by 45% over the past five years compared to a 15% gain in the broader UK stock market, as represented by the FTSE All-Share index.’