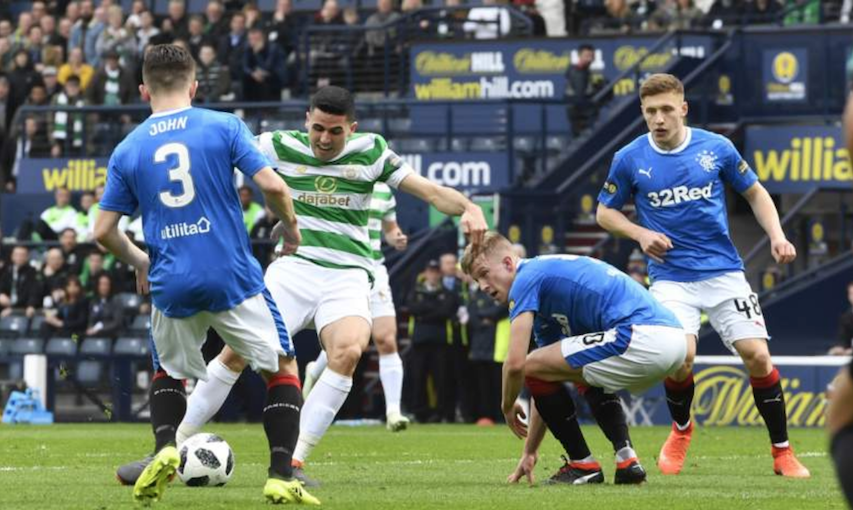 Celtic’s domination of this fixture is putting in danger its status as one of football’s great rivalries.

The Parkhead club swotted aside their opposition so comfortably that the rivalry has been all but reduced to a walk-on part for the blue half of Glasgow.

This tie’s billing as one of the season’s biggest matches was not so much based on any uncertainty about the outcome, more a case of how it would provide a stepping stone towards another clean sweep of trophies for the reigning treble holders.

Celtic’s superiority and an emphatic scoreline were also significant in almost certainly denying Graeme Murty any chance of remaining in the Rangers dug-out next season.

There was an element of self-harm in Murty’s tactics, playing the midfield trio so deep in order to protect a frail back four that it handed Celtic’s own midfield, marshalled by the imperious Scott Brown, the opportunity to roam at will and push the Ibrox men further on the defensive. In the first half only 2% of possession took place in Celtic’s defensive third.

From the fifth minute when Moussa Dembele hit the post it was virtually one-way traffic and it was just a matter of time before Celtic opened the scoring. Tom Rogic obliged with an impressive turn and strike, and Callum McGregor doubled Celtic’s advantage before the break.

Dembele made it three from the penalty spot just after half time when Ross McCrorie’s sending off made it mission impossible for Rangers. That was his seventh goal in nine games in this fixture.

Somehow, despite their depleted numbers, Rangers edged their way back into the match, with Alfredo Morelos looking most likely to make the breakthrough. But a goal eluded them and when Olivier Nthcam scored a second spot kick for Celtic it was game over.

Celtic boss Brendan Rodgers has now won eight and drawn two of his meetings with Rangers since taking over in the East End of Glasgow and will be relishing an opportunity to secure back to back trebles when his side meet Motherwell in the final.