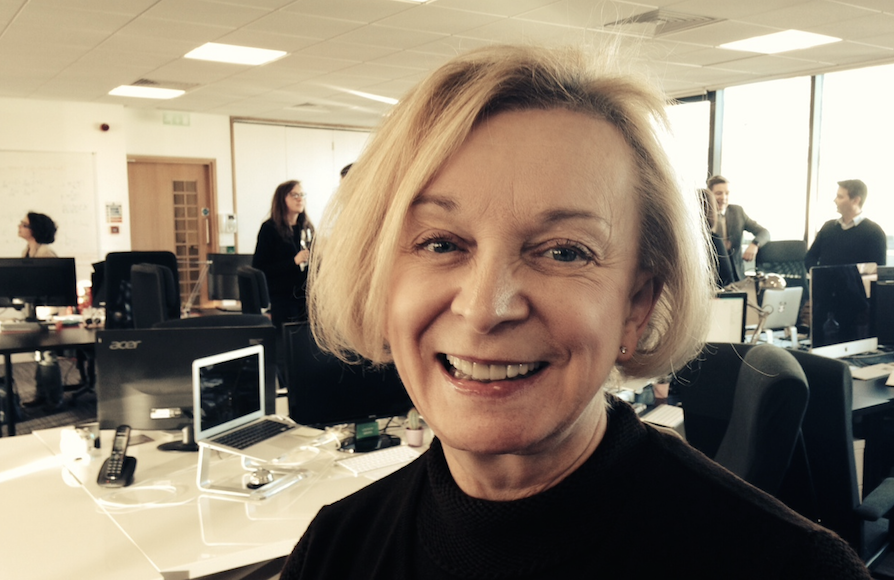 Moya Greene pictured at the offices of Mallzee in Edinburgh

Moya Greene is retiring as CEO of Royal Mail in September after more than eight years and will be replaced by logistics chief Rico Back.

Ms Greene will receive a cash payment equivalent to 12 months’ base salary which was £547,800 last year.

She will also get a payment equivalent to the target annual cash bonus of £367,000 when her employment ends.

Mr Back joins the board on 1 June following the announcement of the 2017-18 results. His appointment follows a search led by Peter Long in his role as chairman of the nomination committee.

Mr Back has been a senior Royal Mail group executive and CEO of the European subsidiary, General Logistics Systems (GLS), for 18 years.

He was a founding member of German Parcel in 1989, which Royal Mail acquired in 1999. This business was subsequently rebranded as GLS and under his leadership, it is now the top performing ground-based deferred parcel company in continental Europe.

Mr Back has nearly 30 years’ experience as a senior executive in the international parcels industry.

Sue Whalley, who was appointed chief operations officer in 2014 and, subsequently, managing director of Royal Mail Letters and Network, will become chief executive  of Post and Parcels, Royal Mail UK. This consists of all the revenue and operations in the UK, other than Parcelforce Worldwide and Royal Mail International.

Ms Whalley will also join the board on 1 June and will play a key role in representing the company in the UK.

She is a highly experienced executive, and is leading the transformation of Royal Mail’s UK operation. She is a former partner at McKinsey & Company, where she advised blue chip companies on strategy, business transformation and stakeholder management.

Ms Greene will step down from the board on 19 July, the date of the company’s AGM. She will remain at the company until 14 September in order to provide advice and counsel, working closely with Mr Back to ensure an orderly handover.

Following her departure, she will pursue a range of other interests, including developing her portfolio career. She is a non-executive at easyJet and a Trustee of Tate. Ms Greene will, as previously announced, become a non-executive director of Rio Tinto in the second half of 2018.

“When Moya joined in the summer of 2010, the company was balance sheet insolvent. Since then, Royal Mail has been transformed, including our privatisation in 2013 and two significant, ground-breaking agreements with the CWU.

“Alongside the strong financial position Moya has secured for the company, we have invested over £1.5 billion in our UK operation in recent years. We are one of the most favourably viewed brands in the UK.

“I would like to extend to Moya our sincere thanks for her tremendous contribution during a defining time for us.

“Under Rico’s leadership, GLS has become the leading delivery company of its kind in Europe, making a highly valuable contribution to the wider Royal Mail Group at the same time.

“The board believes that Rico’s track record, his strong commercial acumen and his deep understanding of the delivery industry mean he is ideally placed to lead Royal Mail.

“It is also very pleasing to note that our succession planning has enabled us to make two major internal promotions today. Alongside Rico’s appointment as Group CEO, I am delighted to welcome Sue to our Board. Sue is leading the very important transformation of our UK business. She took the principal role in negotiating the operational aspects of our recent agreement with the CWU and is leading on the implementation of all aspects of it.

“For some years, Sue led our Regulation and Government Affairs functions at Royal Mail, and was heavily involved in the privatisation process. Her very significant experience in strategy development, business transformation and regulation will be of great value to us.”

Ms Greene said: “It has been my pleasure and a great privilege to serve as CEO of this cherished UK institution. I am proud of what we have achieved over the last eight years.

“It is very pleasing to note that around 20 per cent of this Company is owned by our employees and retail shareholders. Most of all, I am honoured to have worked alongside Royal Mail’s people and the union leadership.

“It is their hard work and dedication that connects households, communities and companies across the UK every day. I would like to warmly congratulate Rico and Sue, two colleagues with whom I have had the privilege of working closely with for many years.”

Mr Back said: “I am very pleased to be appointed Group CEO and to lead a company which is so much a part of the fabric of the UK. I look forward to working closely with Sue, the wider Board and my Group colleagues. I would like to thank Moya for all her support and counsel over the years and wish her well in the future.”

Ms  Whalley said: “I am very pleased to be joining the Royal Mail Board. I look forward to working with Rico and the rest of the Board as we continue the transformation of the group.”