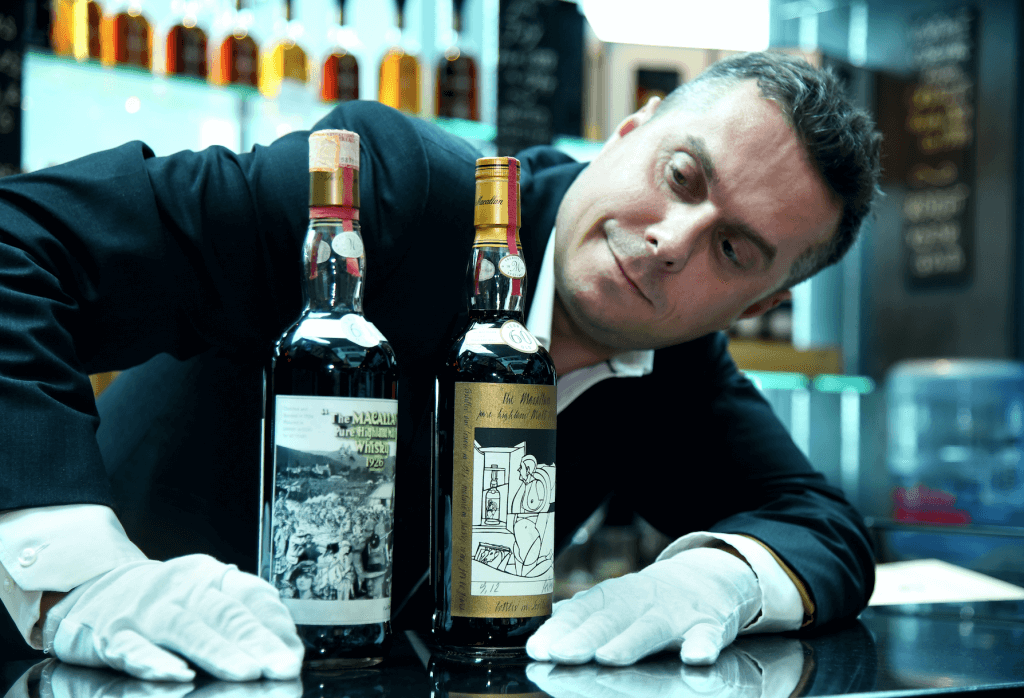 A world record price has been achieved for a pair of bottles of whisky. Two extremely rare editions of The Macallan 1926 have changed hands for $1.2m.

The pair are labelled with original artworks by renowned artists Sir Peter Blake and Valerio Adami.

An international businessman paid $600,000 for each bottle to add to his private collection.

The Macallan distillery also currently holds the record for most expensive single whisky bottle sold at auction with The Macallan M Imperiale achieving $628,000 at Sotheby’s Hong Kong in 2014.

The two bottles of Macallan 1926 are among the most rare ever produced. The whisky itself was aged in sherry-seasoned oak barrels before being bottled and released in 1986.

A further 12 were given to the Italian artist Valerio Adami, (released in 1993) one of the most acclaimed pop artists of the 21st century.

Each artist created a bespoke label, making them highly sought after by art-lovers and whisky collectors alike. The  bottles are presented in cabinets, or tantaluses, and are based on the ‘brass and glass’ distillery spirit safe designs.

They were sold by Le Clos, the Dubai-Airport based luxury spirits retailer.

Iain Delaney, managing director at Le Clos, said: “Le Clos has built a long-standing relationship with both The Macallan and Dubai Airports and we are thrilled to be able to celebrate our 10year anniversary with another world-record sale.”

Geoff Kirk, director of prestige at The Macallan, said: “These represent some of the most exclusive bottles ever produced making this an iconic sale that will be remembered worldwide for years to come.

“It is incredibly rare for The Macallan 1926 to be made available for purchase, and the sale offers whisky connoisseurs the chance to secure historic bottles emblematic of 20th century pop culture.”