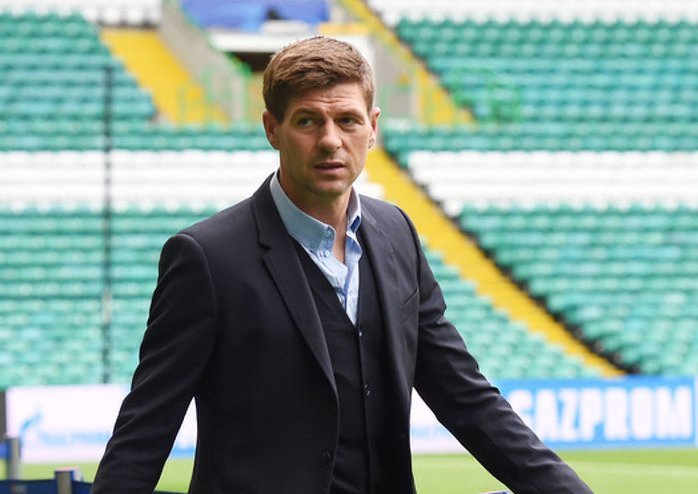 Former Liverpool captain Steven Gerrard is in the frame to become the new manager of Rangers (pic: SNS Group)

All eyes will be on the directors’ box at Parkhead on Sunday to see if Steven Gerrard is among the VIP guests for the final Old Firm game of the season.

The former Liverpool captain is reported to be on a shortlist to take charge of the Light Blues in the summer, with current boss Graeme Murty unlikely to be handed the reins beyond May.

Murty was eventually appointed until the end of the current campaign after the sacking of Pedro Caixinha in October but will almost certainly return to his role as head coach of the development squad on completion of his contract.

The managerial situation has taken an interesting twist with Kop legend Gerrard, a Liverpool academy coach, being strongly touted for the Govan hot seat.

Long-suffering Rangers fans have been craving a manager to rekindle excitement at Ibrox and despite his lack of experience, the Kop legend, who was at Ibrox last month to see 10-man Celtic defeat Rangers 3-2, would certainly do that.

It would be a bold move to appoint 37-year-old Gerrard, as whoever comes in will have to quickly steady the ship.

Rangers were thrashed 4-0 by Celtic in the recent Scottish Cup semi-final. In the dressing-room post-mortem which followed at Hampden, exception was taken to the reaction of senior figures Lee Wallace and Kenny Miller, both players being suspended by the club. No public explanation has yet been given for their banishment.

Celtic could have clinched the league with a win at Hibs last weekend only to slip to a rare league defeat under Brendan Rodgers, someone who knows Gerrard very well from his time as Liverpool manager

Sunday now offers the mouth-watering prospect for the green-and-white half of Glasgow of wrapping up a seventh successive league title against their fiercest rivals.

You have to go back to 1979 to find the last time Celtic beat Rangers to be crowned league champions and PFA Scotland Young Player of the Year nominee Kieran Tierney said: “It’s a massive, massive game on Sunday. Everyone at Celtic knows that and we look forward to it.

“If we get the one win we need from our last four league games then it’s seven-in-a-row for Celtic.

“It doesn’t matter so much how we do it, just that we do. But we want to do it as soon as possible and do it in the Celtic way. I don’t care how we do it as long as we win it. In seasons down the line, it’s not who you win the league against that goes in the history books, it’s the fact you won it.”