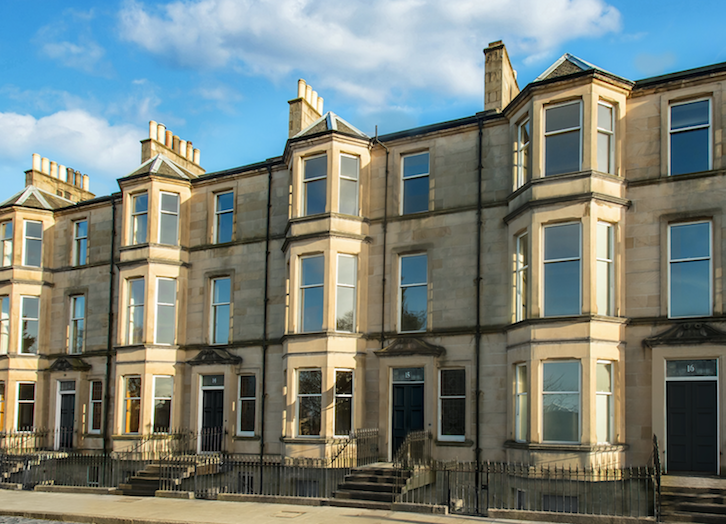 Two former luxury hotels have changed hands after being acquired for conversion to residential apartments.

Property developer Square and Crescent has bought The Howard and Channings Hotel from The Edinburgh Collection.

Plans were unveiled in November to return the two establishments to their residential grandeur.

Work is due to begin on converting the Grade-A listed Howard on Great King Street in Edinburgh’s New Town into nine luxury apartments early next month.

The three townhouses that form The Howard were originally built as private residences during the 1820s and were converted into a guesthouse and later a hotel in the years following the Second World War.

The transformation of the three Georgian townhouses that form the previously five-star hotel, which sits within the Scottish capital’s UNESCO World Heritage Site, is expected to take around 12 months, with the nine apartments due to be completed in the spring of 2019.

The former four-star Channings Hotel on South Learmonth Gardens in Comely Bank will be converted into 15 apartments in two phases, with phase one due to also start in May.  There will be a mix of one, two and three bedroom apartments with some upper units having lift access.  The ground and lower ground apartments will have private gardens.

The 42-bedroom hotel consisted of five townhouses, one of which was home to Antarctic explorer Sir Ernest Shackleton and his wife, Emily Mary Dorman, between 1904 and 1910, during the time when he was secretary of the Royal Scottish Geographical Society in Edinburgh.

Simon Cook, director of Square and Crescent, said: “It’s not often that you get to work on two properties with such rich histories and so we’re very excited about unveiling our plans for this pair of sites.

“The Howard forms an integral part of the Edinburgh Old and New Towns World Heritage Site, while Channings Hotel has its own illustrious history.

“These apartments are going to make truly magical homes for their new owners and will give them a chance to own a small piece of Edinburgh’s history.”

Square and Crescent was founded by Mr Cook and Euan Marshall in 2010. It has converted more than 20 townhouses in Edinburgh’s New Town and West End since its first refurbishment on the city’s Queen Street in 2012. It has also diversified into flatted new build projects in the city centre.

Recent developments have included 40-44 Drumsheugh Gardens, previously the Scottish Legal Aid Board, the Arts & Crafts building at 235 Corstorphine and the conversion of Westerles House and stables in Murrayfield.

Square and Crescent is also on site converting Guthrie Court in Liberton into 30 apartments and has recently acquired two prime projects in the West End and Murrayfield.

Mr Marshall said: “Our business has grown significantly over the past few years and we are delighted to have secured a number of prime opportunities in such a competitive market place.”

Ricky Kapoor, managing director of The Edinburgh Collection, added: “The Howard and Channings Hotel are in safe hands with Simon Cook and Euan Marshall, who I know will respect their history and their heritage while converting them into what will be some of the most stunning apartments in Scotland.

“Selling the two hotels will allow my company to reinvest the proceeds and to continue to develop our other Edinburgh Hotels; the Old Waverley Hotel, the Holyrood Aparthotel, and the Haymarket Hub Hotel.”

Will Scarlett, formerly of Rettie & Co, acted on behalf of Square and Crescent with Alistair Letham from Colliers International acting on behalf of The Edinburgh Collection.