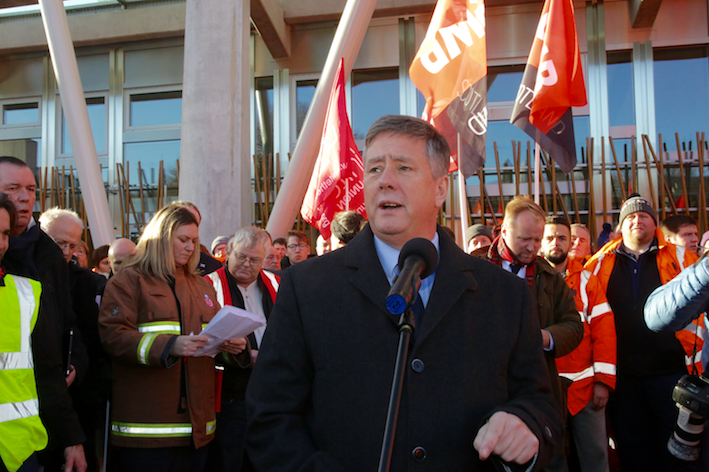 A Canadian company has acquired the threatened fabrication firm BiFab in a deal brokered by the Scottish Government.

JV Driver will take control of the yards at Methil and Burntisland in Fife, and Arnish in the Western Isles through its subsidiary DF Barnes.

The Scottish Government has taken an undisclosed minority stake in BiFab. It was not clear how many jobs will be saved by the deal.

JV Driver is one of Canada’s largest independently owned industrial construction companies. Its subsidiary, DF Barnes has been an employer in the oil and gas, fabrication and marine industries for over 80 years.

Together they will bring project expertise and financial security to the company as it bids for new contracts.

BiFab will in turn bring global reach and expansion to DF Barnes to the benefit of both organisations in Scotland and in Canada.  As part of the agreement, the Scottish Government will take a minority shareholding in the new company to demonstrate continued commitment to supporting the future of the business.

The First Minister Nicola Sturgeon and Economy Secretary, Keith Brown who oversaw the negotiations for the Scottish Government, met JV Driver and DF Barnes’ executive leaders at the BiFab yard at Methil before meeting the GMB union and shop stewards to discuss the agreement.

Speaking at Methil the First Minister said: “We are delivering on the commitment I made last year that we would stand by BiFab and work to secure a long term future for the company.

“We have been in negotiations with DF Barnes for a number of months and today is a significant step forward in our efforts to restore BiFab to its place at the centre of Scotland’s marine energy industry.

“DF Barnes acquisition is a key milestone for all three BiFab yards and as a sign of our commitment to the company’s future, the Scottish Government will maintain a close interest by taking a minority shareholding in the company.

“There is a lot of hard work ahead, and there is no magic bullet for these yards but the commitment of DF Barnes to securing a new future for the business at Burntisland, Methil and Arnish is a hugely positive step and I believe that gives BiFab the best chance of winning future contracts and securing new work. 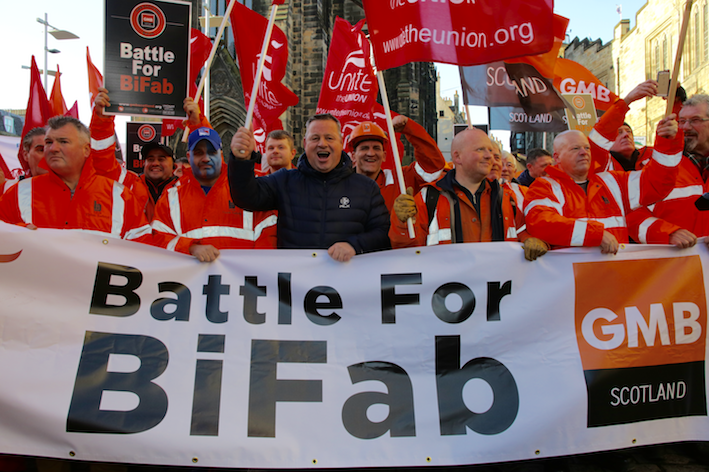 “This announcement is also a tribute to the efforts of the trade unions and employees at BiFab whose dignified actions throughout this difficult time have played a huge part in enabling us to bring in new investors and creating new employment opportunities in Fife, the Western Isles and for the Scottish economy as a whole.”

“Scotland has been an admired world leader in the offshore oil and gas and renewable energy sectors and we are delighted to join with the employees of BiFab and the people of Scotland to ensure the continued growth of BiFab for the benefit of all. This is a great day for us.”

DF Barnes VP in Business Development Sean Power said: “We are looking forward to a long and successful partnership with BiFab.

“We will work closely with management and the union representatives to ensure continuity for the people who work for the company.  We are sensitive to the commitment that employees have made to BiFab and will work hard to meet their expectations.”

Mr Brown said: “This agreement gives the workforce, the company and the government the best possible chance of securing a vibrant future for these yards.

“The Scottish Government believes BiFab can be a thriving business, supporting Scotland’s offshore renewables and oil and gas industry as well as competing internationally.

“As the current contract comes to an end, and while efforts go into winning new work there will continue to be difficult times for the yard and there can be no guarantees that contracts will be won but I am confident this agreement, which sees the Scottish Government become a minority shareholder in the company, will deliver for BiFab’s future in Fife and the Western Isles.”

Scottish Labour leader Richard Leonard welcomed the announcement that the future of the Bifab was secure, but speaking at the STUC Congress in Aviemore, he said that it was time to end the “lurch” from one defensive rescue to the next and that Scotland’s economy needs more planning.

Mr Leonard also said that Scottish Labour would introduce a “Macora Law” which would give workers the preferential right to buy a business when it is put up for sale or facing closure.

He said: “If such an avenue was open it would at least give an option to those workers facing redundancy at 2 Sisters in Cambuslang, and at Pinney’s in Annan. It would put power in their hands instead of in the hands of absentee directors.”