Beast takes a bite out of Scottish high street 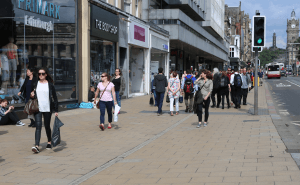 An early Easter holiday did little to compensate Scottish shops for the late wintery blast as sales decreased by 0.2% in March on a like-for-like basis compared to the same month last year.

David Lonsdale, director of the Scottish Retail Consortium, said: “The figures were heavily distorted and flattered by the early Easter and overall last month’s performance will be seen as somewhat underwhelming.”

Grocery sales were the bright spot, bolstered by celebrations associated with Easter and Mother’s Day.

The ‘Beast from the East’ weather phenomenon at the start of March had little impact on food sales over the trading period as a whole.

Mr Lonsdale added: “The same cannot be said for non-food retail sales, with the ‘Beast’ preventing shoppers from reaching stores in the early part of March, and so this more discretionary part of retail spending struggled once again.

“While furniture sales did well, which is often the case at Easter, a spike in online purchasing during the period wasn’t enough to stem a decline in the fortunes of other non-food categories including clothing, footwear and outdoor items.

“Retailers will now look nervously towards April as they calibrate their efforts to tempt shoppers. The underlying weakness in consumer spending persists and household disposable incomes face a number of headwinds, with higher council tax bills landing on doormats and with increased pension contributions for some trebling.”

Craig Cavin, head of retail in Scotland at KPMG: “March was a tough time for retailers in Scotland, as bad weather swept across the country, keeping would-be shoppers indoors. Retailers with an online presence benefitted from the cold, with customers choosing to browse in the comfort of their homes.

“Promotional offers were seen in some stores in the build up to Easter in an attempt to recover lost sales from earlier in the month, but whilst the Easter period boosted sales compared to recent months, March didn’t quite meet retailers’ expectations.

“Once again, March food sales dominated spending at the expense of other categories. There were some exceptions, including beauty sales in the weeks before Mother’s Day, as retailers used the opportunity to move remaining Christmas stock.

“It hasn’t been a positive start to the year for retailers, and it is unlikely that trading conditions will drastically improve any time soon.

“Retailers will need to remain agile and make themselves stand out from the crowd. They’ll also need to strengthen their online offering, if they are to succeed in this challenging climate.”