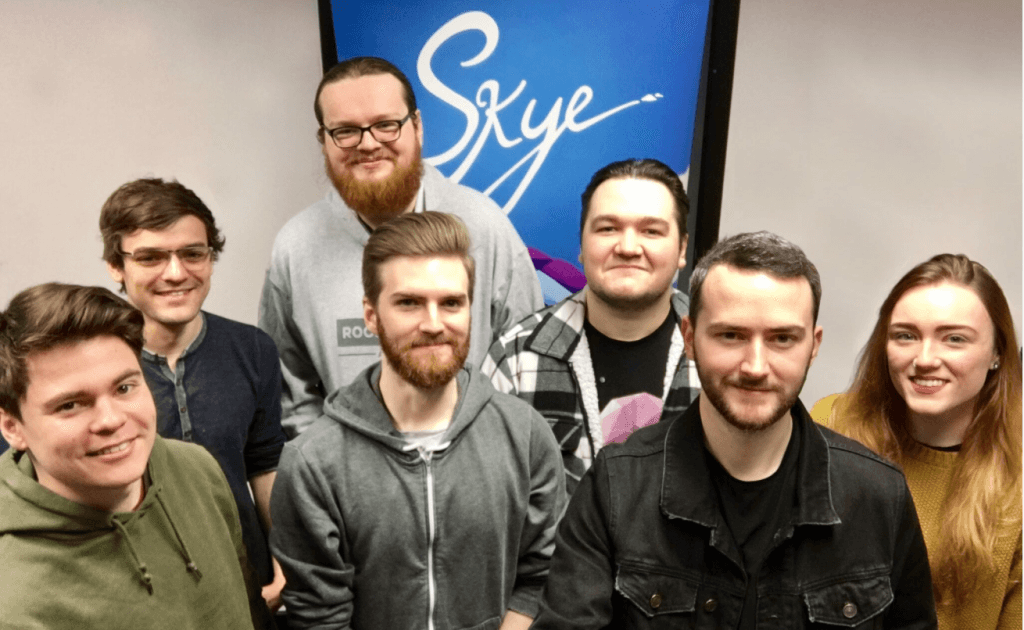 Puny Astronaut is the winner of the 2016 Dare to be Digital competition, which included funding from All 4 Games. It was a recipient of an Unreal Dev Grant.

Since winning the Dare award, the team has been developing its first title, Skye, an exploration game for children, families, and casual audiences.

Based in Dundee, Puny Astronaut was founded by a group of former Abertay University students as part of the Dare to be Digital competition.

Since winning, the team has been focused on developing Skye while also looking for the right partners to help take it to market.

The search led them to games industry veterans and founders of 4J Studios Paddy Burns and Chris van der Kuyl, who immediately recognised the potential of both the game and the studio. They are behind the Minecraft Console Editions.

Mr Burns said: “When we met Puny Astronaut, and were first introduced to Skye, we could see instantly that the team and the game had enormous potential.

“Both are a perfect fit for 4J as our philosophy is based on developing ‘games for everyone.

“Although the team was understandaby keen to bring Skye to market as soon as possible, Chris and I felt rushing it out would be a mistake.

“So, we offered to invest in them instead, which would give them the time, space and resources they needed to complete the game in line with their initial vision and to really do the idea justice.”

Puny Astronaut’s MD Cian Roche added: “We have invested blood, sweat, and tears into developing Skye both whilst as students at Abertay, and since we graduated last summer.

“We’re a small, fresh developer and up until now we had no other option but to rush Skye out to market and hope for the best. With 4J’s investment, though, we’ll be able to produce the game we first set out to create, and share our plans with the rest of the games community.”

Following completion of the investment deal, Paddy Burns and Chris van der Kuyl both joined the board of Puny Astronaut as directors with Chris taking on the added role of chairman.

Mr van der Kuyl said: “When Paddy and I met the team at Puny Astronaut we were bowled over by their talent and enthusiasm.

“We both saw real similarities between them and ourselves when we were first starting out.

“We remember exactly how tough a journey it can be to make it in this industry. Being able to not just provide the financial backing but also help the team to navigate the spider’s web of the market is something we are really looking forward to and it’s fantastic to see a new team – with such a massive future – being supported in this way.”

A spokesperson from All 4 Games ended: “All 4 Games originally provided some funding for Skye as part of the Dare prize prior to 4J Studios, who were able to provide funds to make the game even bigger and better. We were happy to be involved at the start and can’t wait to see what happens next.”

In an answer to a parliamentary question submitted by Ash Denham, Fiona Hyslop revealed that Scottish Enterprise had invested £11.5m in 38 video game companies over the five years since 2011.

Commenting, SNP MSP Ash Denham said: “Scotland’s video games sector has been booming, with just a handful of firms when the SNP came into office growing into more than a hundred now.

“This sector offers high quality jobs and exports around the world – with Rockstar North in particular a global brand.

“Support from Scottish Enterprise has underpinned the growth in this sector as part of our wider efforts to grow domestic businesses and increase exports – with latest figures showing Scottish exports rising faster than the rest of the UK.

“To build on that success, it’s essential that Scotland remains in the world’s largest single market after Brexit.”