Mixed hearing for women amid the noise of battle

There has been the usual diet of threats, promises and warnings in a week in which women’s voices competed for attention over the ever-present noise surrounding the Brexit debate.

It began with a continuation of the women’s rights campaign at the Oscars in Hollywood and carried through to a feisty presentation by two prominent women at the Edinburgh International Conference Centre.

While the female volume was turned up, it was not always for the right reasons, as evidenced by the fall of Lady Judge whose resignation from the chair of the Institute of Directors was a particular blow, coming as it did on International Women’s Day.

Lady Judge was the first woman to chair the organisation in its 115 year history and the experience has not been good for the female cause.

Murky allegations of sexism and racism also delivered a few wounds to the IoD as a promoter of good corporate governance and will present a challenge for Stephen Martin who was appointed director general only last year. Mr Martin was a guest at last year’s IoD Scotland director of the year awards and the turmoil will inject an extra flavour into this year’s event which takes place later this month.

As one of Britain’s oldest business groupings was trying to restore its reputation, one of the younger breed was enjoying a day of celebration in Edinburgh. Investing Women, the business angels group, held its third annual Ambition & Growth conference and dinner, deliberately on International Women’s Day.

Scottish government minister Shona Robison kicked things off by promising more resources for women, without detailing exactly how women would benefit from the general funds available, while the dinner was addressed by Jennifer Campbell, best known for her role in the television series Dragons’ Den.

Ms Campbell, a self-professed ‘northern lass’ led us through her career and how she prepared herself for being in the public spotlight. She came across as a rounded individual who had not let ‘fame’ affect her. 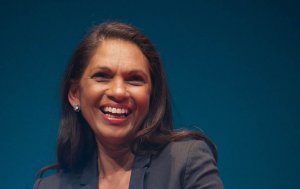 Two other familiar female faces were in the city on Friday when the Pensions and Lifetime Savings Association annual conference was addressed by Gina Miller (right) and the television journalist Laura Kuenssberg.

The latter recounted some of her understanding of the current Westminster hand-wringing over Brexit while the former retold stories of her campaign through the courts to assert parliament’s rights over government decision making.

Ms Miller’s address focused on free speech and she spoke of the misogyny and racism she had to face, and even death threats, as she fought the Brexiteers and those who opposed her simply for being black and a woman. Some of this vitriol was via social media, which she accused of “ghetto-ising minds” by diverting people from sources of news they should trust. Sadly, some of the abuse also came from the traditional media.

She told us she would not be bowed by those who wish her harm, and would be calling for a people’s vote on Brexit.

“I will not let those people win,” she told her audience. “They give me more power and energy to stand up for what is right because I do not want to live in a world where their voice trumps mine.”

In a year that marks the suffragette movement’s victory for the right of women to vote, Ms Miller’s tenacious stand against reactionary forces was particularly timely.