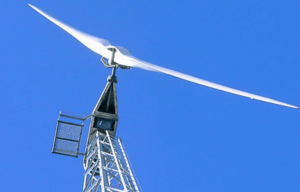 A wind turbine manufacturer has blamed cuts in subsidies to the renewables sector for the firm’s collapse.

Glasgow-based Gaia-Wind, which celebrated the roll-out of its 1000th device last April, has appointed a provisional liquidator.

The company moved its operations from Denmark seven years ago but Meston Reid and Co is now looking for a buyer in a bid to save all or part of the business and secure 12 jobs.

In a statement, Michael Reid of Meston Reid said cuts to renewables by the Westminster government in 2015, including the end of the main subsidies for onshore wind, had created problems for the company.

The statement said: “Although Gaia-Wind has a long and successful history in the industry, competitive pressures in Denmark reduced sales in the last year or so which was not helped by the UK government’s reduction in tariff support in recent years.

“Although a business plan at the end of 2017 provided a practical basis for survival, recent drastic cuts in Italian and Japanese government support for small scale wind turbines lead to dramatic reduction in the immediate order pipeline in those markets.

“Faced with these challenging circumstances in each of its main market areas, the board reached the unfortunate decision that the company had no option but to cease trading.”

Johnnie Andringa, Gaia-Wind director, said bringing in a liquidator had been a “last resort”.

He added: “The board has worked hard over a long period of time to develop a sustainable business in wind energy.

“With almost 2,000 wind turbines installed mainly in UK and Europe as well as Australia, Tonga and Alaska, an opportunity presents itself for someone to purchase the service, maintenance and spare parts aspect of the business.

“With the turbine design offering the best price, performance and reliability available in the market, and demand still evident for the product in the UK and globally, it would be great if a trade sale could be achieved which preserves the jobs of the highly skilled and committed workforce.”

Jenny Hogan, deputy chief executive of Scottish Renewables, said: “This disappointing news reflects clearly the state of this sector in the UK.

“Small wind turbine manufacturers like Gaia-Wind have suffered from both cuts to support provided by the UK Government and, more acutely, a lack of direction for the policies which should sustain a viable market for their products.

“While Gaia had sought export markets, these too have been affected by similar issues.

“This announcement comes as a blow to Scottish manufacturing and another reminder that cuts to and inaction on the Feed-in Tariff made at Westminster have very real effects for the people who work in the renewable energy industry and its supply chain.”