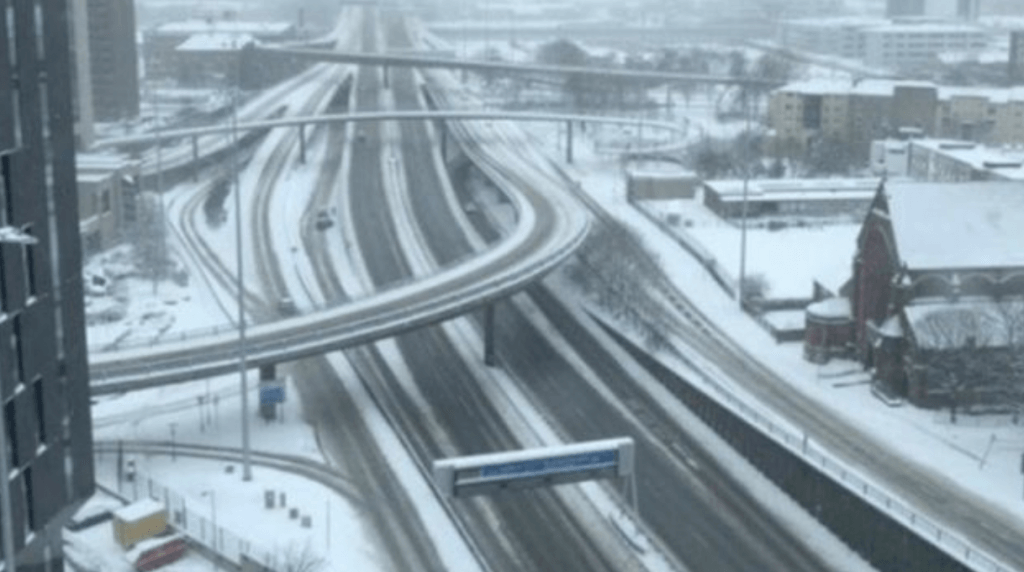 Whiteout: the M8 in Glasgow was unusually quiet

Severe weather conditions will see continued disruption to the travel network over the weekend and into next week as thousands of businesses count the cost of the chaos.

Businesses were assessing the impact of the big freeze as trading ground to a halt. Shops, offices, restaurants and factories across the country were shut as staff struggled to get to work and deliveries were held up.

Those working on ‘just in time’ principles were looking at lost orders and negotiating with clients over revised delivery schedules.

A number of events have been called off including the Scottish Conservative party conference in Aberdeen where the Prime Minister was due to speak; the Chartered Institute of Taxation lunch in Edinburgh, which was to be addressed by Dame Susan Rice; and last night’s Scottish Property Awards in Glasgow.

Bank of England governor Mark Carney was due to deliver a speech on cryptocurrency in Edinburgh today but will now speak via a live link from London.

Airlines are hoping to resume some services today but rail and bus services remain suspended in many areas.

EasyJet and Ryanair will not start operating departing flights from Edinburgh until lunchtime, while many roads remain unpassable.

First Minister Nicola Sturgeon was drawn into a dispute with the Road Haulage Association (RHA) after saying in parliament that many of the lorries had no reason to defy police warnings not to travel.

She said this contributed to jams which left more than 1,000 motorists stranded in their vehicles on the M80.

The crew of two drivers sent to Inverness and Elgin, and the one sent to Aberdeen were trapped in standstill traffic jams for more than 24 hours outside Perth and only freed to travel by Thursday afternoon. The Edinburgh driver was trapped from just after 11am on Wednesday until around the same time on Thursday in the jam at Castlecary Arches on the M80.

The RHA responded by saying many lorries were already in transit when the bad weather descended.

A number of rail and bus services in the amber alert area have been suspended throughout Friday morning over concerns for safety of staff and passengers.

Troops have been called into transport medics to and from Edinburgh’s two biggest hospital’s after a request from NHS Lothian to the Scottish Government.

The extreme weather has seen health boards cancel non-essential operations and outpatient appointments on Friday, while NHS 24 has described its operations as being “stretched”.

Passengers have been warned to only travel to airports once they have checked the status of their flight with the airline.

Glasgow is also seeing its first flights since Wednesday.

ScotRail said no services will be running through the amber alert area until tests are carried out on tracks, while Virgin Trains has said its west coast route to Scotland could be closed while is eastern line will be limited.

Check for updates here throughout the day