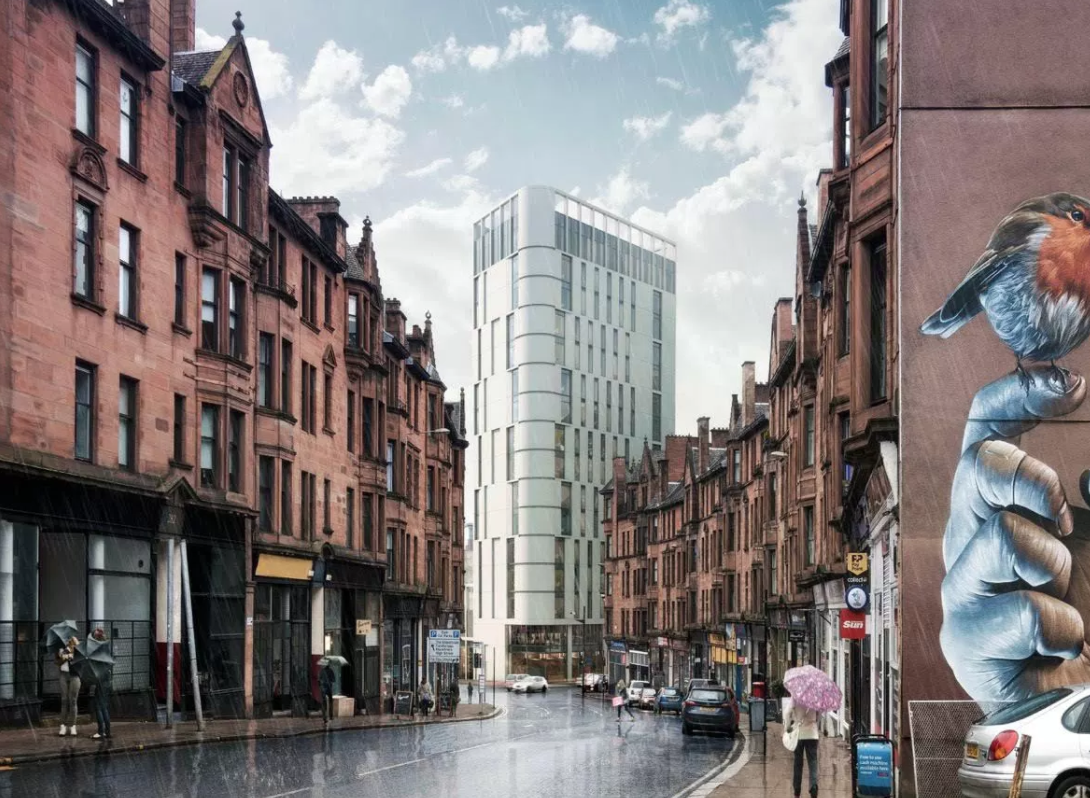 Developers want to build a £40 million office, bars and accommodation block that will form a “gateway” to Glasgow’s Merchant City.

Merchant Point, at the corner of the High Street and George Street, will include 401 private and rented rooms for students and young professionals.

It will also house a replica of what is considered the city’s oldest pub, following a campaign to save it.

The developer is setting up a £250,000 fund, offering start-up funding and office space in the 12-storey building.

Glasgow-based Structured House Group (SHG), took over responsibility for developing the area after city entrepreneur and publican Colin Beattie failed in an attempt to create an Ashton Lane-style piazza of bars and restaurants.

City councillors will consider the proposal in May.

Included in the plan is a commitment to retain a refurbished version of the Old College Bar, believe to be the city’s oldest, and to reproduce its interior.

However, critics say the building does not blend with the neighbouring red stone Victorian architecture.


Craig Inglis, chief executive of SHG, said: “We have spent a long time working to get the look of this development right to ensure that it stands as a recognisable beacon of regeneration.

“Merchant Point will be a visible manifestation of the great work that is going on in the East End to help it reach its full potential.  It will be a community in itself, with retail, leisure and business functions, all generating additional income for the area.

“An area of the building will be set aside as a free-to-use hub for young local businesses, dedicated to supporting interesting and exciting start-ups and university spin-out companies.

“Giving those fledgling businesses free office space and other facilities will help them through an important stage of their development.”

Mr Inglis added: “There has been a lot of publicity around this proposal because of the bar but that has overlooked what a fantastic addition this will be to the city centre and to the local economy.

“As a Glasgow-based company, we have enormous respect for the city’s built heritage and the important place The Old College Bar holds in its history.

There’s no disguising the poor fabric of the bar building as it stands, so we will have to replace it.

“Our amended plans aim to retain as much of the character and charm of the existing pub but to put it on a footing that’s appropriate for today to safeguard its future, hopefully for the next century.

“We were happy to work with city council planners, universities and local businesses on a building which, if approved, will stand tall as an entrance to the city from the east.”

Mr Beattie, owner of Oran Mor and the Lismore as well as The Old College Bar, has given his backing to the scheme.