As Leonard in hot water with Labour... 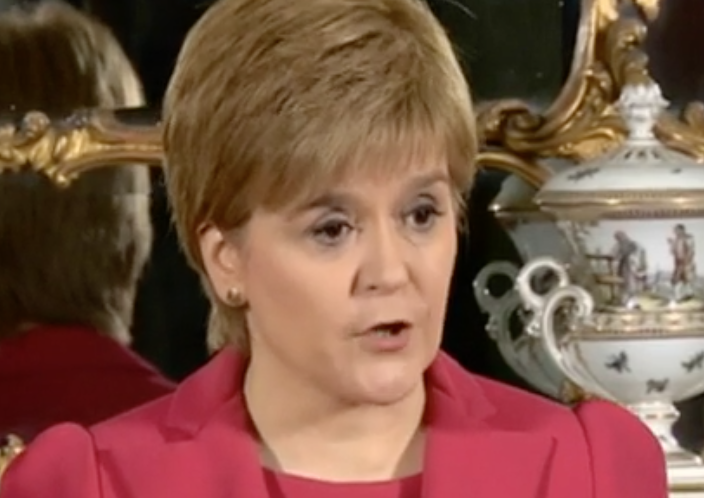 Sturgeon: least damaging option is to stay in the single market

Scotland’s economy could lose £12.7bn a year as a result of Britain leaving the single market and customs union with a trade deal, according to analysis by the Holyrood government.

Economists say this would be the cost of a hard Brexit and is outlined in a document, titled Scotland’s Place in Europe: People, Jobs and Investment, which considers three potential outcomes for Scotland’s economy when Britain exits the EU in March 2019.

The other options are that Britain remains in the single market and customs union, or secures a free trade agreement.

Scottish government economists calculate that if the UK was to pursue a WTO relationship, the cost to Scotland would be about 8.5% of GDP, equivalent to £12.7bn a year by the year 2030, or £2,300 per year for each person in Scotland.

First Minister Nicola Sturgeon said: “It’s looking in a clear-eyed, hard-headed way at what the impact on our economy will be.”

She added: “This is modelling done by Scottish government economists.

“It is an economic model and what it says is that by far the best option for the Scottish economy is to stay in the EU, but short of that the least damaging option is staying in the single market.”

A UK government spokeswoman said: “We are seeking a deal that works for the whole of the UK, that delivers on the result of the EU referendum.

“Rather than trying to undermine the result of a democratic referendum, we urge the Scottish government to work with us to ensure, as we leave the EU, we protect the UK’s vital internal market.

“Scotland trades four times as much with the rest of the UK as it does with the EU, so it is vital that we ensure that market continues unimpeded.”

Professor Graeme Roy, director of the Fraser of Allander Institute, said the analysis by the Scottish Government adds to the weight of evidence that a ‘hard Brexit’ will represent a significant economic shock for the Scottish economy.

“Trade with the EU accounts for over 40% of Scotland’s international exports whilst EU migrants are a key part of the workforce, particularly at a time when Scotland’s working age population is projected to decline.

“Whilst the Scottish Government is right to highlight the risks of leaving the single market, like it or not Brexit – in one form or another – appears certain to happen. This is the reality in which they operate.

“Given this, it is imperative the Scottish Government also now start to outline their practical plans to help Scottish Businesses both respond to the challenges that Brexit presents as well as maximise any opportunities that Brexit might create.”

Gordon MacIntyre-Kemp, CEO of pro-nationalist group Business for Scotland, accused the UK government of “deliberately trying to conceal the damage a hard Brexit will wreak to the UK economy.”

He added: “The key issue is that for people to understand just how damaging Brexit will be, we need to know if the UK Government really would damage the economy with a No Deal Brexit, and therefore we believe the Scottish Government is correct in waiting until later in the year when more details on the Brexit deal will be available before calling a second independence referendum.”

However, the Scottish Tories accused the SNP of scaremongering and said Scotland could make a success of the UK’s decision to leave the European Union provided ministers in both governments work together.

“As the nationalists proved with their independence White Paper, their financial forecasts simply cannot be trusted.

“No-one’s doubting that Brexit will pose challenges, but it will bring opportunities too.

“That’s why it’s vital the SNP works with the UK Government to achieve the best Brexit deal, and not will the process to fail in the hope of furthering its own constitutional obsessions.”

The analysis is publishedas Labour MPs call or their party to back a soft Brexit and have questioned Scottish leader Richard Leonard’s position on the EU single market.

They say his support for a hard Brexit risks damaging the party’s revival in Scotland. London MP Wes Streeting said the Scottish Labour leader had given his party the hardest Brexit stance at Holyrood and urged him to reconsider.